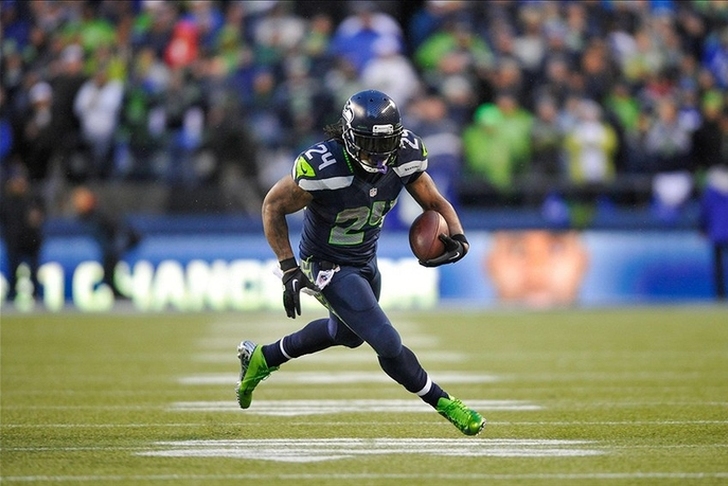 Beast Mode's time in the NFL might not be over. According to multiple reports, the Oakland Raiders have interest in bringing Marshawn Lynch out of retirement. There appears to be some truth to those rumors and we break down what needs to happen and what you need to know about the Marshawn Lynch to the Raiders rumors below.

How Did This Start?
The start of the rumor/report can be traced to Raiders' broadcaster Greg Papa. He teased a potential signing on his radio show Thursday. Papa didn't name any names, but said the running back in question didn't play last year and wasn't any of the names currently connected. At that point, it was easy to connect the dotes to Lynch.

Is There Any Truth To The Rumor?
If it was just Papa, the Lynch-to-Raiders could be dismissed. But it's also Adam Schefter and Ian Rapoport reporting on the Raiders' interest. So, yes. While that doesn't mean a move will happen, the reports out there to appear accurate. Plus, it's not the first time Lynch and the Raiders have flirted.

Wait, This Almost Happened Last Year?
According to Rapoport, this is not the first time the Raiders have gone after Lynch. It also nearly occurred last year.

The two sides have interest in each other. And with Latavius Murray gone, there is a need at RB for Oakland.

Why Would The Raiders Do This?
As mentioned above, the Raiders need a feature back with Murray gone. Sure, it's a good running back draft class, but this is Marshawn Lynch. If he's still in shape (and he reportedly) is, the Raiders could end up with an upgrade over Murray. Plus, there's the hometown connection.

Why Would Lynch Return To The NFL?
Perhaps Lynch still has the football itch. After all, he's only turning 31 in April. And if Lynch were to return, it makes sense he'd want to play at home. He's from Oakland and went to Cal; it's reportedly his dream to play for his hometown Raiders. As an added bonus, the Raiders appear set to be a Super Bowl threat next year.

What Could Prevent This Deal From Happening?
Let's assume Lynch does want to return, since that's the most obvious hurdle for the Raiders. If Lynch decides to unretire, it's not as simple and joining the Raiders. The Seahawks still hold his rights and might not be willing to outright release him. That would require a trade and the Raiders might not want to give up any type of draft pick for Lynch. Secondly, there is the issue of cap space. Lynch would count $9 million against the cap. The Raiders do have over $33 million in cap space, but a large chunk of that is devoted to re-signing QB Derek Carr and DE Khalil Mack to what will be mega-extensions.

So the Lynch-Raiders rumors aren't as simple as they might seem. But yes, it could happen.