Here Are The 5 Toughest Games On The Raiders 2018 Schedule 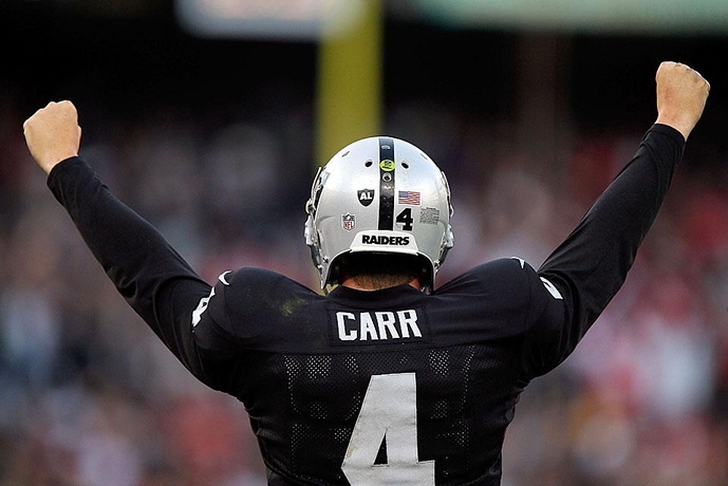 The 2018 NFL schedule won't be released for several months, but the Oakland Raiders already know their home and away opponents for next season. The Raiders and the rest of the AFC West will play crossover games against the AFC North & NFC West.

According to CBS Sports, the Raiders have the 3rd easiest schedule in the NFL based on 2017 opponent wins-loses. Raiders opponents finished with a 121-135 record in 2017. The Raiders will play only three playoff teams (Chiefs, Steelers, and Rams) from the previous season. Despite having an "easy schedule" the NFL is always changing, and Oakland will be tested. Here are the Raiders five toughest games in 2018:

5) at Denver Broncos
Denver does have their questions marks on offense (though they will address their quarterback problems either via free agency or the draft), but their defense is still one of the best in the league and will be a test for quarterback Derek Carr. Even though they've missed the playoffs for the past two years, this game will give the winner a huge edge in the race to win the division.

4.) at San Francisco 49ers
The 49ers are undefeated with starting quarterback Jimmy Garoppolo. He led the 49ers to five straight wins to end the season after starting the year 1-10 without him under center. One of the biggest weaknesses for the Raiders last season was their secondary and Garoppolo and this 49er's offense may give the Raiders some struggles on the road. Also, important to note that the 49ers have the most cap space in the NFL and will likely add plenty of talent this offseason.

3) vs. Los Angeles Rams
The Rams had the league's best offense in 2017 and should be just as good in their second year under head coach Sean McVay. Todd Gurley is one of the best players in the NFL and LA's high-flying passing attack should test a Raiders defense that was very vulnerable last season, especially through the air. This will be one of the biggest tests their defense will face all year long.

2) at Kansas City Chiefs
Kansas City has won the AFC West two years in a row and is the favorites to win it again in 2018. Arrowhead is an extremely tough place to play and given the significance this game figures to have in the divisional race, it could be the most important game they will play all season.

1) vs. Pittsburgh Steelers
Though the schedule hasn't been released yet, I will be shocked if this isn't a primetime game on Sunday night or Monday night. The Steelers have been one of the best teams in the AFC for the past decade and a half and have plenty of star power - but star power the Raiders can match.

Once again, this will be another huge test for Oakland's defense and will likely be a very entertaining shootout.