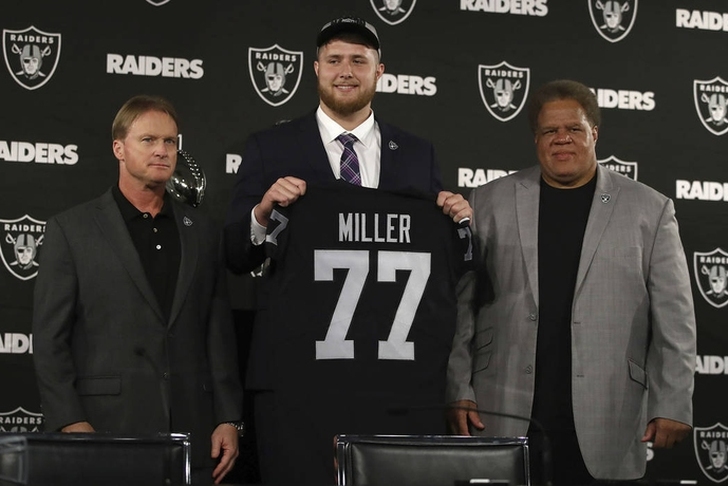 USA Today
Grade: C+
Breakdown: "Drafts are replete with boom-or-bust prospects. Jon Gruden's return produced what looks like a boom-or-bust draft. Trading a third rounder to Pittsburgh for WR Martavis Bryant could be a coup ... if Bryant's head is screwed on soundly. Gruden clearly prioritized offensive tackles, correctly moving down in Round 1 for Kolton Miller before taking North Carolina A&T's Brandon Parker in the third. Were either overdrafted in a thin tackle class? Stay tuned. LSU pass rusher Arden Key will enter the building with extensive personal issues, while Michigan DT Maurice Hurst is a medical risk. If it all pans out, Gruden should take a preliminary trip to Vegas. Otherwise, at least his $100 million line of credit can withstand a few hits."

ESPN
Grade: B
Breakdown: "Two things are pretty clear to me in looking at this Raiders draft: They know that if they don't protect Derek Carr they're in trouble, and they're willing to bet that new coach Jon Gruden and his staff can develop some high-ceiling talent that also comes with risk. The Raiders moved down in Round 1 and landed Kolton Miller (pick 15), who reminds me of former Patriot and newly-minted Giants left tackle Nate Solder. This is a great athlete with a huge frame who projects as a good NFL left tackle if you maximize the talent. There's no guarantee. Third-round pick Brandon Parker (65) is the same in that he's got the frame, but new O-line coach Tom Cable has his work cut out for him. Protect Carr and you're competitive, and with Donald Penn now 35, it's clear that's the objective.

"Arden Key (87) has legit top-10 talent but off-field concerns that had him available late in Round 3. If Gruden and staff can keep Key focused, this could be a home-run pick ... but the risk is clear. Maurice Hurst (140) was off the boards of some teams because of a medical condition that arose at the combine. Again, this is a first-round talent at defensive tackle. I like the Raiders' willingness to place some bets. But I also just listed four players who all come with varying degrees of risk.

"Elsewhere, Nick Nelson (110) has a shot to help a secondary that needs bodies, and Johnny Townsend (173), my top-ranked punter, should fill in capably for the departed Marquette King. At the end of the day, this draft might be defined by what Cable is able to do. And if Key is solid off the field, watch out. High risk, high reward."

Bleacher Report
Grade: C+
Breakdown: "There's not a more volatile draft class than what the Oakland Raiders assembled. Their entire class is extremely athletic, which the team desperately needed. But they'll also be trusting offensive line coach Tom Cable to mold two projects at offensive tackle in Kolton Miller and Brandon Parker, and used premier assets to reach for those players. Trades for receivers Martavis Bryant and Ryan Switzer were shrewd moves that helped increase their grade.

"Edge-rusher Arden Key and defensive tackle P.J. Hall are also a mixed bag in terms of projection. Key has on- and off-field issues but is talented enough to justify the third-round gamble. Hall has great mobility but has to adjust his play from small-school competition to the NFL. It'll take some time for three of their top four picks to become competent NFL players.

"The third day of the draft was excellent, though. Nick Nelson is a solid corner, and Maurice Hurst was a terrific bargain in the fourth round. Both should play in 2018. If even two of their first four picks work out, then the Raiders will have had an excellent draft, but they could easily get next to nothing from this group."

SB Nation
Grade: D+
Breakdown: "Jon Gruden’s first draft back as an NFL coach was strange. It began by trading down from No. 10 to 15 to take UCLA left tackle Kolton Miller. He’s a solid prospect, but he needs a lot of work. Hopefully it can happen in a hurry because Donald Penn just turned 35. Miller is just an unrefined athlete who needs to be coached up. The Raiders opened the third round by taking North Carolina A&T offensive tackle Brandon Parker. He’s an obviously talented player, but raw as well.

"Can line coach Tom Cable do in Oakland what he struggled to do in Seattle the past few seasons?

"Edge rusher Arden Key was another puzzling choice. He’s a situational pass rusher who needs to get much stronger in the NFL. He has some off-field issues, which caused him to fall to 87th overall. The Raiders also used a pick on Wisconsin cornerback Nick Nelson, who may not play this season due to injury.

"The best choices Oakland made were on the defensive line. In the second round they picked up disruptive Sam Houston State tackle P.J. Hall. Then in the fifth round they stopped the free fall of Maurice Hurst. The Raiders are suddenly disruptive up the middle."

Yahoo Sports
Grade: C-
Breakdown: "Taking a gamble on a pick or two with red flags can work out. How about taking chances on just about every pick? Jon Gruden’s first draft in his return was a boom-or-bust clinic. In the grade you have to include the trade for Martavis Bryant (who is hard to depend on), and the Raiders used an extra pick gained in a first-round trade down for that. Offensive tackle Kolton Miller is very athletic but also needs to be developed. That pick could go either way. Arden Key has great talent but also as many off-field red flags as anyone. Nick Nelson slipped because of a torn meniscus in a pre-draft workout. Maurice Hurst obviously fell far due at least in part to a heart issue found at the combine. Drafting Johnny Townsend, the third punter off the board in the fifth round, doesn’t exactly bump up the grade. Then the Raiders capped it with Azeem Victor, who was suspended twice last season, once for a reported failed drug test and another for a DUI arrest. Any one of Oakland’s high variance picks could work out. This grade could end up being a strong “A” in three years if everything works out. But it’s hard to remember the last single draft class that contained this much risk."

Sports Illustrated
Grade: C+
Breakdown: "It seems that after 10 years away from coaching, head coach Jon Gruden forgot that his football team has a defense. Well, at least Gruden remembered that other teams have defenses. It was the fear of those—and specifically those in the AFC West, where dominant pass rushers seem to grow on trees—that prompted Gruden to use his first-and third-round picks on offensive tackles. If you take one, you might as well take two, because in today’s NFL, the right tackle is just as important as your left. Case in point: the men that projected long-term right tackle Brandon Parker will be blocking twice a year are Von Miller, Joey Bosa and Justin Houston. And in training camp, Parker will see Khalil Mack. Parker might initially sit while Miller, who was position-flexible at UCLA, plays the right side, with Donald Penn working one more year on the left.

"As for that defense that got ignored early on, its hole at cornerback was addressed in the fourth round (Nick Nelson), but the hole at stack linebacker wasn’t addressed until the sixth round (Azeem Victor). On the bright side, new coordinator Paul Guenther plays a lot of two-deep zone, which eases the coverage burden on corners and linebackers. And so does a quality pass rush, which the Raiders hope third-rounder Arden Key can provide. Playing with two deep safeties usually leaves your 3-technique DT aligned on the tight end side, where he becomes easier to double-team. You need a defensive tackle with burst and strength to combat this. In Cincinnati, Guenther had Geno Atkins. Here, he’ll have P.J. Hall."