Grading The Raiders 2017 Offseason (So Far) 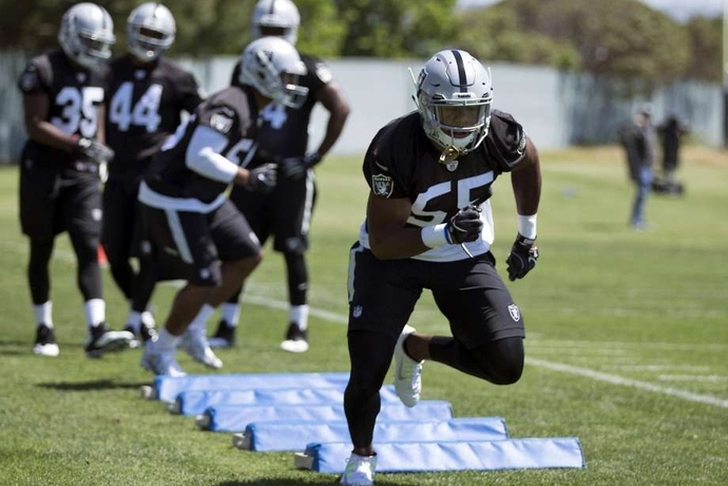 The 2017 NFL offseason is basically over, which means it's time to grade what the Oakland Raiders did this year. Sure, a few more players might be traded, cut or signed, but it's likely the Raiders are finished making move. Below, is the Raiders' offseason grade, as well as roster moves, what went right and what went wrong.

As for the grading, teams don't get a "B" just for showing up. A "B" is a good offseason, while an "A" is a great offseason. A "C" is not bad in my eyes, it's simply average at best. It's tough to get a "D," since that basically means a team botched almost everything about the offseason. Obviously there is a lot of opinion here, so hit me up on Twitter if you disagree with the Raiders' offseason grade.

What The Raiders Did Well:

Adding Beast Mode To Replace Latavius Murray
I love the addition of Marshawn Lynch. For starters, the Raiders really did need move to excite the Oakland fan base with their pending move to Vegas (more on that below). Lynch, the hometown kid, provides that. There's a chance he might not be as good as Latavius Murray is, given that Lynch didn't play last year, but it was worth the risk. Lynch is a great fit in the Raiders running back group with DeAndre Washington and Jalen Richard set to be the change of pace / third down backs. If Lynch resembles his prime Seahawks form, the Raiders offense might just be the best in the NFL.

Signing Jared Cook
The one weapon Derek Carr didn't really have last year was a reliable TE. Now he does. Cook signed on a team-friendly two-year, $10.6 million deal. For comparison, Dion Sims got a three-year, $18 million deal from the Bears. The Raiders got one of the best free agent TEs on one of the cheaper deals. That was a great move by GM Reggie McKenzie and among my favorites by the Raiders. On a related note, adding the speedy Cordarrelle Patterson gives the Raiders another deep threat and a return boost.

Secondary Help
The Raiders had issues last year in the passing game. So they let D.J. Hayden walk and replaced him with first round pick Gareon Conley. It was great value, although Conley fell because of a rape accusation. Assuming Conley is cleared in that case, he'll immediately provide a huge boost as the nickel corner. It won't be long before he's playing outside. The Raiders had a rough time covering tight ends last year and second round pick Obi Melifonwu (who many thought would go in round one), could be the answer to that problem. It was another great value pick and Melifonwu will likely replace Reggie Nelson long-term. In the meantime, he could be a great option as a "big nickel" safety. He'd replace a linebacker and help in coverage. Getting Conley and Melifonwu on the field in passing downs is a must for the Raiders.

What The Raiders Didn't Do Well:

Moving To Vegas
The move to Vegas is and will continue to be a divisive topic for Raiders fans. I totally understand the reasons for moving from Oakland (where would they build the stadium?), but I don't like it. I like the Raiders in Oakland and it sucks the city won't have them. Plus, what kind of home field advantage will the Raiders truly have in Las Vegas? It's a tourist town and I can see a good chunk of the tickets going to away fans or corporate sponsors. It's not the end of the world and it won't affect the grade for the Raiders, but it's a move I'm not a huge fan of.

Lack Of Front Seven Help (Especially LB)
The Raiders lost several players up front this year. Stacy McGee, who was injured for much of last year, was overpaid by the Redskins. The ineffective Dan Williams was cut. Malcolm Smith struggled and picked up a larger contract than he deserved from the 49ers. The best LB on the roster last year remains unsigned in Perry Riley. Losing those guys would have been fine, but the Raiders have only added third round pick Eddie Vanderdoes at DT and fifth round pick Marquel Lee at LB. That's not anywhere near enough. Getting Mario Edwards healthy and last year's second round pick, Jihad Ward, going might take care of the DL issues, but it's a bit of a risk.

But the major problem is that LB. It was the Raiders' biggest need entering the offseason and they're in danger of starting Jelani Jenkins and either Cory James or Lee. That's not going to get the job done at all. The Raiders tried and failed to pick up players like Zach Brown and have yet to fill the need. At the very least, the Raiders need to re-sign Perry Riley.

Grade: B+
This offseason wasn't as splashy as the 2016 one for the Raiders. They didn't spend as heavily in free agency, which was the right move with big contracts coming for players like Khalil Mack and Derek Carr. But this was still a productive offseason. I may not like Marshall Newhouse, but the Raiders didn't overpay for him or any of their free agents. They used their money well and picked up a few nice players along the way. The only real complaint I have is at the linebacker position. The Raiders have not filled that need and it prevents an A grade from me. Re-sign Perry Riley or make another similar move and it will be an A. The Raiders are going to be really, really good next year.

Follow our Oakland Raiders team page for all the latest Raiders News or download the Chat Sports App!