Game-By-Game Prediction Of The Oakland Raiders' Record For 2017 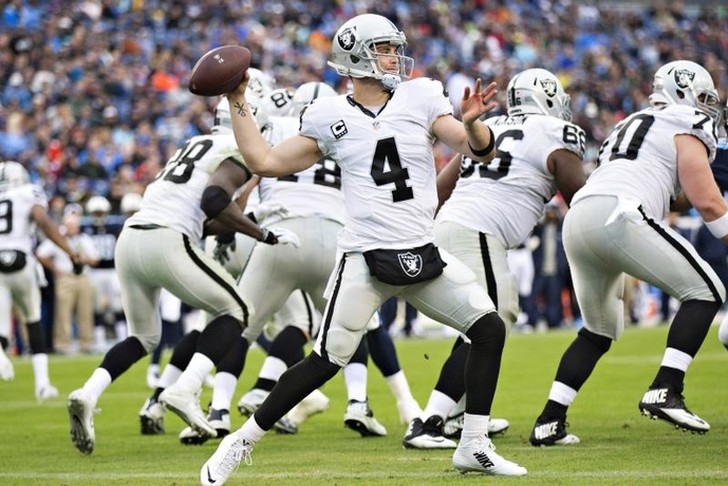 The Oakland Raiders made the playoffs last season, but came up short in their Super Bowl bid after Derek Carr's injury - and they are determined to get back to the playoffs and finish what they started last year. We got our first look at Oakland's road to the playoffs when their schedule was released a few weeks ago. The Raiders play in the tough AFC West, but many are expecting another playoff berth. Here's a game-by-game prediction of the Raiders' schedule this year:

Until New York gets a viable answer at quarterback, they aren't going to be a threat.

Kirk Cousins is a quality player, and he's always on top of his game at home - but their defense still has plenty of holes for the Raiders to exploit.

Denver's defense is still one of the best in the league and will be a test for Derek Carr. I expect these two quality teams to split their two contests this year, with the Raiders falling in Denver.

The Ravens are building their way back into being a contender, but they aren't quite there yet. Oakland has the advantage, especially with the Ravens having to travel all the way across the country.

The Chargers don't have many offensive weapons and are rebuilding their defense. Carr and Amari Cooper should have a field day against them.

Oakland's matchups with Kansas City will be like theirs with Denver. All teams at the top of the division will split the games between them, and I don't think the Chiefs' offense will travel with them on a short week. Home teams usually win these Thursday night games.

Has anyone figured out what the Bills are doing? Tyrod Taylor is an underrated quarterback and LeSean McCoy is great, but other that that, they don't have a lot. One thing they do have is a depleted secondary that Oakland will shred.

This game will be a toss up. Miami hoping to build on last year's breakout season and will keep this game close. That means it will likely come down to quarterback play - and Carr is much, much better than Ryan Tannehill.

There's not much that needs to be said about why this game is important. Oakland was thought to be the biggest threat to New England last year before Carr's injury, and that's expected to be the case again. This game could be for home-field advantage throughout the playoffs. I just can't pick against the defending champs.

After losing on the road, Oakland will have a defensive gameplan that is ready to go at home and will stifle Trevor Siemian/Paxton Lynch and the Broncos.

This is going to be one of the most fun shootouts of the entire season. That said, Oakland's defense is a bit better than New York's, giving them the edge.

Even though it's at home, the fact that this is a Sunday night game against one of the best teams in the league will make this an extremely tough test for the Raiders. It will also serve as a tune-up right before the playoffs (assuming Oakland is in position to make it once again).