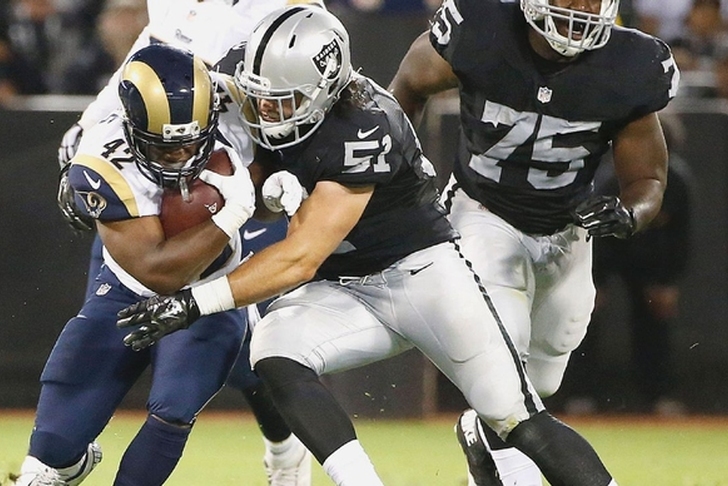 The 2016 NFL Draft is complete, but the Oakland Raiders haven't addressed all of their needs yet. That's a common theme across the NFL, as every team has positions that could use an upgrade. With only so much cap space and a limited number of draft picks, teams simply end up having needs that they weren't able to address before or during the draft. So what is the biggest team need for the Raiders? We have the answer to that question below, and throw out a few potential players the team could add to help fill that need.

Middle Linebacker
The Raiders are set at outside linebacker (in both their 4-3 and 3-4 look), with Khalil Mack, Bruce Irvin and Aldon Smith (when he returns from suspension) forming a dangerous group. Third round pick Shilique Calhoun providing depth. But middle linebacker is a major concern. They're heading into the season with last year's fifth round pick Ben Heeney manning the middle. Heeney showed some promise, but barely played 300 snaps last season and is very unproven. The Raiders wisely cut Curtis Lofton, who was terrible last season, but the Raiders have little depth. They drafted Cory James in the sixth round, but he actually might be a better fit at OLB than MLB. They signed Daren Bates in free agency, but he hardly played in three seasons for the Rams. The Raiders are putting a lot of trust in Heeney, and they'd be better off trying to add another MLB to at least provide some depth. While the MLB options are limited, the Raiders could find some help.

Who Oakland Could Add:

The Chargers cut Donald Butler just two years after giving him a seven-year, $51.8 million deal. Butler has struggled the past two seasons, but he still has some ability. At this point, Butler should be way cheaper than $51 million. There's no guarantee he'd bet out Heeney for the starting role, but he'd at least push him and provide some depth. He's best in a 3-4 scheme, something the Raiders ran at times last season and have most of the pieces for. Hawthorne is far from the same player who signed a five-year, $19 million deal with the Saints in 2012. While Hawthorne thrived with Seattle after being an undrafted free agent, he regressed in New Orleans and was cut by the team this offseason. While he's 30-years old, Hawthorne could help contribute to the Raiders. He might not be a quality starter, but he could provide depth and be a veteran influence. However, he's probably the least desirable of the three players listed. At one point, Ryans was one of the best MLBs in the NFL. He's just 31 years old, but injuries have limited his playing time and effectiveness. However, Ryans is absolutely worth signing for the Raiders. He might be a better player right now than Heeney, and would at least be able to show him a thing or two. Perhaps he's just a two-down player at this point in his career, but the Raiders could still use Ryans.

There will be a few quality players that don't end up making team's 53-man rosters. Perhaps it will be a veteran that is cut in favor of a rookie. Maybe it's a young player with raw talent that a team tries to sneak onto the practice squad. Either way, if the Raiders don't add anyone before the start of the preseason, expect them to monitor the waiver wire closely.