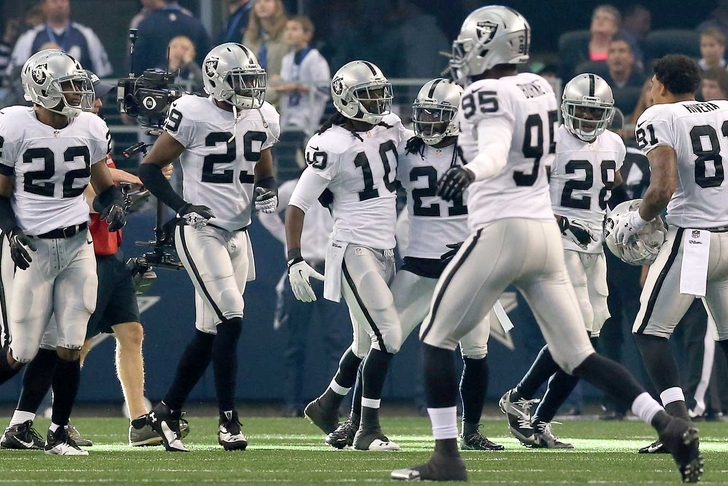 It's been a common refrain over the last decade across the NFL - the Oakland Raiders are not very good. Head coach Dennis Allen was fired after an 0-4 start, and the Raiders appear to be headed for another top pick in the NFL Draft.

This won't be the first time Oakland has picked near the top of the draft, so their roster does have some top-level talent. What areas can Raider fans look to for hope, and where does Oakland need to improve? Rookie Derek Carr was picked in the second round of the draft, and while he has had some growing pains, he looks like he'll become Oakland's best quarterback since Rich Gannon. Matt Schaub is an average backup quarterback for now, but the Raiders finally have a legitimate starting QB.

Maurice Jones-Drew and Darren McFadden would have been a lethal running back duo in 2011, but not in 2014. Both backs are still serviceable, but this is definitely an area the Raiders need to address in the draft. Look for them to pick up a running back or two in the later rounds of the draft.

James Jones has proven to be a legitimate threat on the outside as he's turned himself into a borderline top receiver, though he's still better suited as the second receiver in a good offense. Denarius Moore and Vincent Brown are high-level slot guys, but are being forced to play on the outside due to the lack of a No. 1 target.

The tight end position is an absolute joke right now, and they need an upgrade as soon as possible. There are a lot of talented individuals on the offensive line in Oakland, but they haven't played well as a unit to this point in the season. The potential is there for the Raiders to have one of the better units in the NFL, they just need some time to play together. The Raiders have some solid players on the D-Line, headlined by Justin Tuck and LaMarr Woodley, but they lack depth. That's caused the starters to overextend themselves, causing them to get tired late in games and decrease their effectiveness. Adding some solid backups and young talent would improve this unit immensely. Outside of rookie Khalil Mack, the linebacking core just is not very good. Nick Roach and Sio Moore are decent players, but once again, the lack of depth is an issue. Oakland has a couple of aging veterans in Charles Woodson and Carlos Rogers, but they have absolutely no talent outside of those two guys. This is probably the position the Raiders need to improve the most and should address both early in the draft and in free agency.