Throwback Thursday: The Top 10 Bo Jackson Plays of All Time 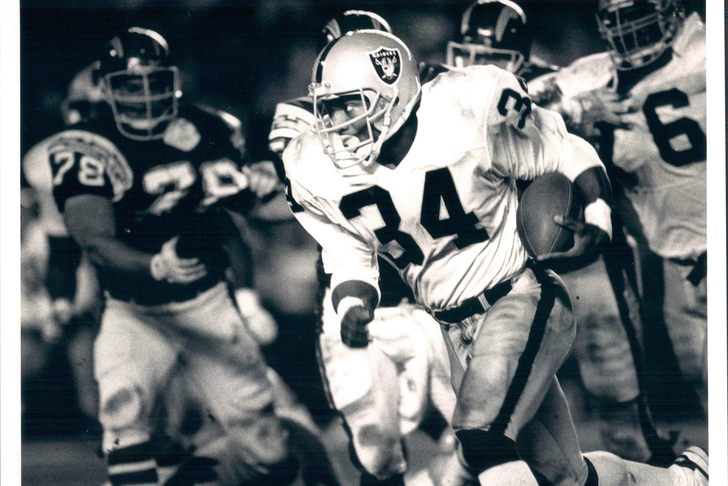 Bo knows you miss him.

He knows that you fill your time with the Chuck Norrises of the world, making cutesy books and T-shirts about fake superheroes until Bo comes back to fill the void.

Can you just imagine what it is going to be like when mad scientists build him a titanium exoskeleton? He will be the first partial-human running back to lead the NFL in rushing after his seventieth birthday.

So, Bo would like you to watch these ten videos, and understand that he will be back, if only as some robot freak during the first machine uprising. Or, perhaps, you should just enjoy...

THE TOP 10 BO JACKSON PLAYS IN THE HISTORY OF THE UNIVERSE.

10. Bo Jackson gets away with murdering Brian Bosworth's career

This wrecking ball run occurred during a massively-hyped 1987 Monday Night Football match-up between the Seahawks and Raiders. Bosworth went out of his way to talk smack prior to the game about a rookie Bo, promising to stop the inevitable.

Bo ran for 221 and 3 scores, flattening the Boz and creating an albatross for Bosworth to wear into draft-bust land, and for as long as YouTube exists.

As the ball approaches Bo during this 1988 contest between the Royals and Yankees, it just looks like any other outfielder timing a "gee golly, you tried!" jump in an attempt to steal a home run.

Except this is Bo, and when he uncoils and makes the catch at 0:08, it becomes apparent that "any other outfielder" has jack shit-ake mushrooms to do with Bo Jackson.

8. Bo shows he knows, even as a sophomore at Auburn

These are the exact moments in time where Bo Jackson's muscles completely out-evolve the rest of humanity. The fluid motions that he shows in traffic are just...out of this world.

Post hip-surgery, Bo knows, and we know, that he never really got back to fully being the genetic anomaly that he was during the mid to late-eighties.

This is why this clip is so special. Bo does what Bo does, barely (and just barely) stepping into a rocket throw to gun down Dave Nilsson at the plate. And, Mr. T drops the tough guy act, if only for a second, to acknowledge just how damn great Bo Jackson truly is.

6. Bo gives Raider Nation a clip to play before every Denver Broncos match-up

I count five Bronco defenders, sporting the Cheeto orange puke jerseys, completely annihilated by the equivalent of throwing a metal ball bearing onto an electric football board.

Any time you hear the folks at NBC or ESPN engage in Peyton Manning idol worship, play this clip back. Over and over. It is plays like these where you realize why Bo was worth cartoon superstar status.

"ProStars...it's all about helping kids." Yup.

5. Bo decides to run up a wall, because well, you can't

Even though Bo just MAGICALLY appearing from frame right to track down this ball is superhuman enough, Bo knew that you wanted something more.

So, he decided to give Jamiroquai his inspiration for his "Virtual Insanity"video by making walls look like floors, floors look like walls, and his uniform look like it was painted on.

4. Bo sends a baseball into low orbit during the 1989 All Star Game

First of all, it is fun to watch Ronald Reagan stammer on about his own playing days as Bo Jackson turns into a flaming Pokémon of awesome at the plate.

However, the best part is having the honor to listen to the great Vin Scully call the lunar launching of a baseball, followed by odd "mmm" sounds from Reagan from :40-:53 and Scully exclaiming "he almost hit it out-of-state!"

Deion's commentary is surprisingly humble during this excerpt from the Dan Patrick Show. But, after watching the video, there is no other way he could have approached it.

Bo tosses Deion aside like a shower curtain , carrying another Florida State defender a good five yards into the end zone. I watched the last 20 seconds of this clip probably 17 times in preparation for this article. Wow.

2. Unstoppable Bo pisses off a nation of little brothers in Tecmo Super Bowl

My vote would be for Ray Allen's absolutely insane, uncheckable range in the NBA2K series which is perhaps responsible for the death of two of my PS3 controllers...but as this insane quarter-chewing run in Tecmo Super Bowl for the NES highlights, Bo Jackson was the first and perhaps the best example of a player getting mad love from the creators of a sports title.

I mean, he's not quite QB Eagles, but who is?

1. Bo creates the ultimate Bo highlight, running out of the Kingdome.

He was always three steps ahead of everyone else, and then he was gone way too fast.