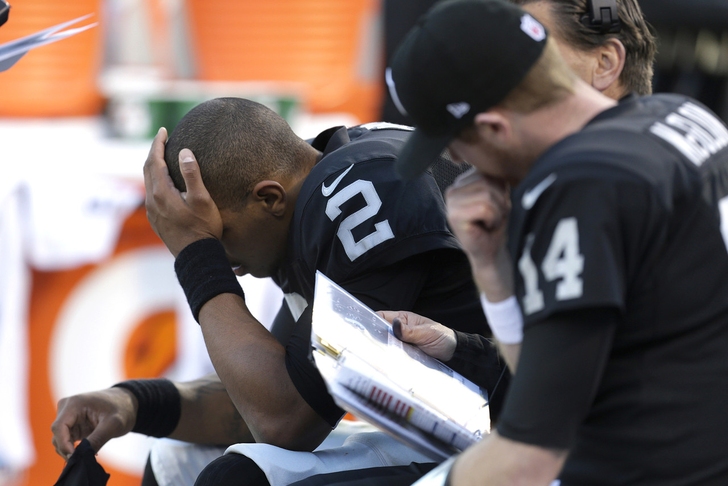 The 2013 Oakland Raiders are a grab-bag of youth with upside, veterans on the slide, and serviceable one-year contracts meant to fill the gap between the end of the Al Davis era and the lifting of the puzzling financial burdens he left behind.

This was always slated to be a "purge year."

Last season, General Manager Reggie McKenzie and head coach Dennis Allen came in and established the framework of the New Raider Culture. Year two was always supposed to be the assessment phase, sifting through the young talent left from the preceding era, stripping the team down to the bare-bones skeleton needed to build year three.

When the money frees up.

2014. When the Raiders officially become the New Raiders.

Yet...like the fans we are, we got caught up. I know I did. But, seven games in, it truly looked like the defense was primed to sneak its way back to being a top-ten unit. Terrelle Pryor was getting pub on ESPN for being a possible top-tier fantasy starter. The Raiders had a chance to be halfway-to-fully relevant in a conference full of mediocre teams.

And then, the greatest atrocity to come out of Philadelphia (since this video) happened.

Nick Foles took every last Flintstones vitamin in his carry-on to Oakland, going 22 for 28 for wait for it...wait for it...

Six out of the Eagles' first seven possessions resulted in touchdowns. The Raiders' secondary played frustratingly loose and, starting a theme which would recur through the entire second half of the season, started missing both assignments and open-field tackles.

Bushels and bushels of open-field tackles.

The Raiders looked outgunned, out-manned, and out-everythinged. The offense began to fall into a now familiar pattern of book-ending two or three dynamic scoring plays with a whole load of nothing. The defense took a giant Shatner in the middle of the field.

Somewhere in the middle of this giant turd of a game, the season's bottom fell out.

The rush defense was the Raiders' saving grace during their respectable opening seven-game stretch, allowing just under 90 yards per game.

The Raiders' pass defense over that same span? From semi-awful at 242 YPG in the first seven to full-blown dismal at 267.22 YPG in the final nine.

The same massacre at the hands of the Eagles that started the season spiraling down the drain was the same game where dynamic young question mark Terrelle Pryor suffered a knee injury that eventually got him shelved for a few weeks.

Matt McGloin gets named the starter for week 11 and has a better-than-serviceable NFL debut. This, for us starving members of Raider Nation, felt like beautiful divine intervention mixed with chocolate and unlimited free puppies.

A heartbreaking home loss to the Titans followed in week 12. Ryan Fitzpatrick led the Titans on a 14-play, 80-yard touchdown drive which ate up 6:00 of the final 6:10 of the game, both starting and ending the pain with a 10 yard toss to Kendall Wright that seemed just too easy.

If you would tell me today that random household appliances and wet rags had replaced the Raiders' secondary for the final, gut-puking drive, I would believe it. And remember this--if the Raiders would have won that game, they would have improved to 5-6 and at that point would have been the sixth seed in the AFC.

After blowing a halftime lead and losing to Dallas on Thanksgiving, the season just seemed to sort of...end.

I actively have to force myself to remember Geno Smith and the Jets offense going for almost 40 on a hapless Raider D...followed by Alex Smith (!) and the Chiefs going for 56. Add in a Chargers game that never felt close and a Broncos game which actively triggers my gag reflex, and there you go.

But, here's the catch.

It was supposed to happen like this. This was part of the plan.

The sins of Raiders Past begin their journey toward absolution in 2014, with the Raiders actually getting to draft in the fifth spot and almost $70 million in cap room opening up. Stepping back for a breath...if McKenzie is worth his salt, 2014 is the year where we will see his plan in its first real form.

This is what makes the news that Dennis Allen's job is probably safe a little easier to understand and digest.

I will be the first to admit that I became a reactionary at the end of this season. I wanted so badly for the flashes of Pryor's athleticism, McGloin's arm, and the early Sandlot-esque edge of the defense to mean more than it actually did.

Simply put, the Raiders slid into irrelevance over the final months of the season. They flailed, playing defense like somebody peed on an electric football game board. The hope that the first seven games provided made the fanbase think that a decade-plus of frustration was coming to an end. The answer to our wishes seemed to be here.

Instead, we got a boatload of new questions.

If Allen is retained, year three becomes Year Three. McKenzie and Allen need to take what's left of a very limited squad, then utilize the draft and intelligent free agency maneuvers to make a contender appear out of close-to-thin-air.

In truth, 2014 simply becomes the Year in Oakland.

If Allen and McKenzie can put together a coherent, strong, and unified front and bring in players with both talent and character, the Raiders could see instant, if not playoff-level improvement. The 2014 free agent class is brimming with both bargains and heavy risks at both skill and non-skill positions.

All it really comes down to, however, is that Allen and McKenzie have one offseason left to get the answer to this question down pat--"Why should I come to Oakland?"

After a slow, agonizing crawl to a finish in 2013, they have to think fast.

How the NBA got its groove back