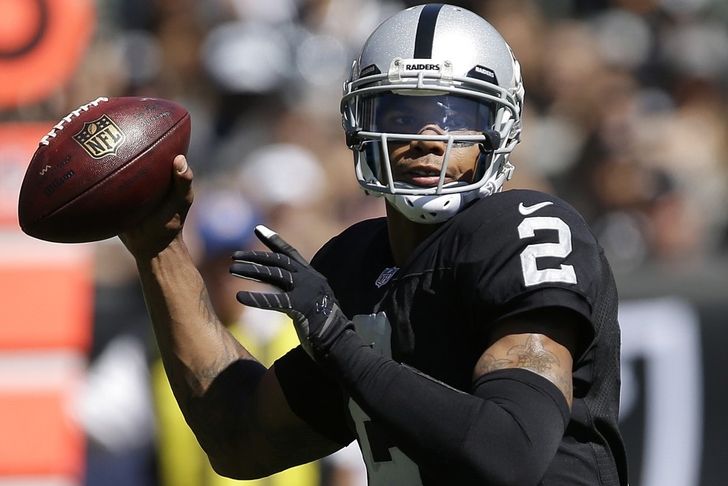 It's been a long, arduous road. The Andrew Walters and Aaron Brooks of the world. Watching Kerry Collins turn into a statue and then seeing his aging process advance by decades per month, as the offensive line left the already-immobile quarterback to become a bunch of internal organs rearranged into unmarked Tupperware.

He Who Shalt Not Be Named in this column getting his purple drank and his Kirby on.

I had to. I apologize.

Anyways, that's just the quarterbacks, folks. We could spend an (my) entire sports-writing career talking about the last ten years of missed opportunities on wide-outs, running backs, offensive linemen, etc. and so forth. It has been a dismal decade with spots of light through the clouds. In a league full of parity, the Raiders haven't gotten the memo.

But, it can and will get better. The prognosticators decried a "pieced-together" Raiders' defense, and what happened? The Raiders are currently sixth in the entire NFL in total defense.

So, without further ado, here are some very encouraging "is that God or a giant f$%#king spotlight" trends in the Raider Nation that make it altogether plausible that the Raiders could contend in 2014 (or now, as they are currently just a game and a half behind the pack for the sixth spot in the AFC.)

Terrelle Pryor is actually an okay to good quarterback with a TREMENDOUS athletic upside.

The Raiders' passing attack is dead last in the NFL right now from a yardage-per-game standpoint. So, the entire bouquet of numbers does not exactly bear out the truth of the matter. However, Pryor is connecting on 64.5% of his passes to a patchwork receiving core consisting of limited-ceiling talents with severe hands problems. That completion percentage, against all reason and legitimate forms of logic, is actually tenth-best in the entire league.

The fact of the matter is that the Raider attack is deliberately and extremely run-heavy by design and necessity. Pryor is 30th in the NFL in passes attempted, placing him right smack dab in the middle of Mike Glennon and fantasy-league pariah of pariahs, Mr. Vick.

If the Raiders receivers can develop (Rod Streater has the potential along with Jacoby Ford as well if he can stay healthy,) and/or the Raiders can use upcoming flexibility to sign Pryor a legitimate number-one or two threat, this offense gains instant dimensionality.

Plus, God Damn all that is holy, have you seen Pryor run?

Along with a quarterback that brings hope, the Raiders will have CAP SPACE to play with in 2014.

ESPN's John Clayton reports that the Raiders will have around $69 million in cap space to play with in 2014 as the weight of dead contracts for players who have long been gone start to fall off of their shoulders. (goodbye, Carson Palmer. Au revoir, Richard Seymour.)

Buoyed by optimism regarding the proposed Coliseum City project which could be a huge step in keeping the Silver and Black in Oakland for the long-term, owner Mark Davis and general manager Reggie McKenzie will most likely be looking to utilize that breathing room to supplement the solid building blocks that are already in place.

Selling the new culture around the Raiders won't be hard. Players are buying in. You can see it in the effort in games where conventional logic would have had them buried before the first play (at Indianapolis, at Denver, at Kansas City.) With the possibility of :gasp: stability :double gasp: coming down the turnpike, who's to say the Raiders couldn't sign an Emmanuel Sanders, Jeremy Maclin, or dare I say Hakeem Nicks to supplement Terrelle Pryor's growth.

Plus, looking over the 2014 free agent list on defense, there are high-impact options available in all price ranges which could take a very good and very cohesive defense and make it even better.

And, the Raiders, despite all of the cascading nothingness of talk prior to the season, are very close to using the salary cap and all of its competitive balancing goodness to get back to "just winning, baby."