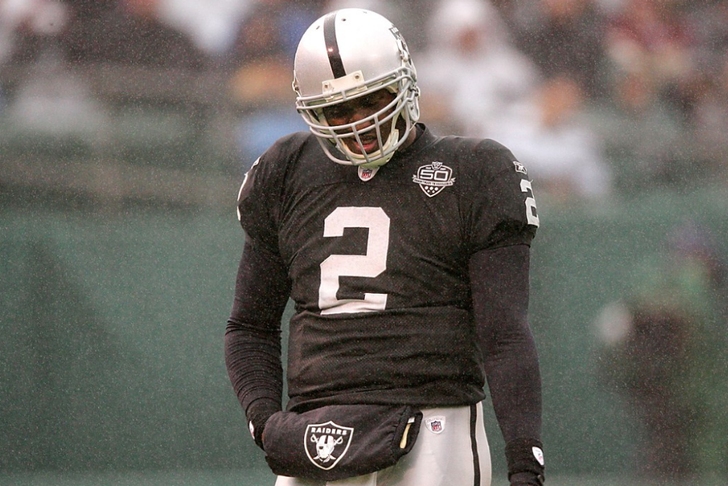 We're all excited for Amari Cooper to break the spirits of every team the Oakland Raiders face in 2015, seeing that he's as close to a sure thing there is coming out of this NFL Draft. Yet, for every Cooper there's a draft bust who breaks our hearts with heaping spoonfuls of potential unfulfilled. Here's our list of The 3 Biggest Draft Busts In Oakland Raiders History. Gallery was serviceable during his seven years in Oakland, so his inclusion on this list might raise a few eyebrows. However, despite flashing some versatility up and down the team's offensive line, he fell far short of justifying the #2 pick in the draft where these players were picked behind him in the first round: Philip Rivers (#4), Ben Roethlisberger (#11), Vince Wilfork (#21), & Steven Jackson (#24).

The ultimate "what if" story, Marinovich's relationship with his beyond-overbearing father has been well documented. After basically being denied a childhood in deference to late football success, Marinovich engaged in a lifelong substance-abuse problem and was pretty much completely out of sorts when drafted by the Raiders out of USC in 1991.

He started just eight games at quarterback for the team before being benched for good in 1992. He never threw a pass in the NFL from then on.

When a #1 pick is more known for his affinity for purple drank than anything he actually did on an NFL field, you have the definition of a bust. JaMarcus lost the Raider Nation straightaway both with his horrid on-field decision making and the general sense that he was a vacuum where football passion went to die. It also didn't help his case with the Nation that he held out for more than six weeks before signing his rookie contract. Maybe he should have waited longer, like perhaps never.

Russell was 1/100th of a Derek Carr, and even that might be generous.