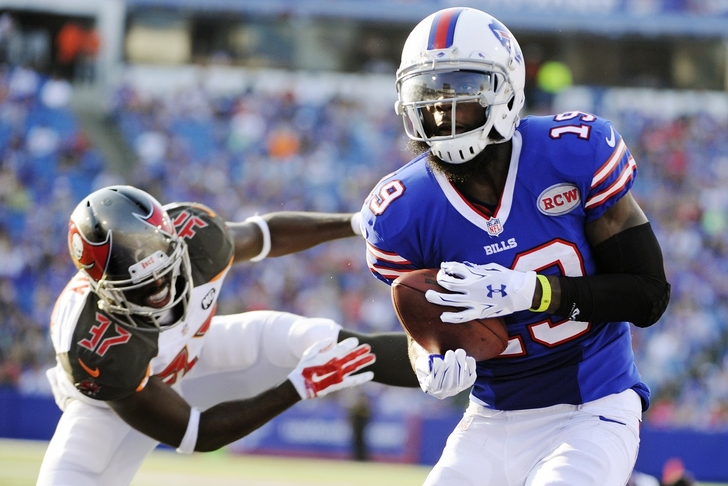 The Oakland Raiders' passing game has been one of the bright spots in their 0-6 start to the 2014 NFL season. However, many NFL writers and Raiders reporters think the time is soon for the Silver and Black to target a marquee wideout. Will it happen in the trade market? This offseason?

Here are the latest rumblings from the Black Hole.

Raiders One Of The Teams Calling On Vincent Jackson?

Ian Rapoport of the NFL Network reports that Tampa Bay Buccaneers wide receiver Vincent Jackson could be the next top-tier wide receiver to be shipped out of the town before the October 28th trade deadline:

Who else could be traded? I’m told #Bucs are getting tons of calls on WR Vincent Jackson. TB loves him as a player, but considers everything

After this season, Jackson has two years left on a deal that carries with it a $24.4 million combined cap hit for 2015 and 2016. If you think the Raiders will be shy about at least engaging in talks, consider the 1-5 Jets' acquisition of Percy Harvin.

While Oakland hasn't been directly linked to Jackson, they have valuable draft picks that could at least entice the Bucs to bite in the next week.

Mike Williams A No Go?

Per Bill Williamson of ESPN.com, the cost for the Buffalo Bills' oft-disgruntled wideout might be prohibitive for the Silver and Black:

There was a report this week that his agent has asked the Bills to shop him. Williams downplayed it and the Bills have said they would consider for No.1 receiver compensation. The Raiders need a No. 1 receiver, but there is no way they should give up a premium pick from Williams. The Raiders need to sign a top receiver in free agency next year or use a top pick on one.

With Jackson a very remote possibility (considering the level of interest around him) and Williams' price tag standing at an exorbitant amount, don't be surprised if the Raiders remain in a holding pattern until the offseason kicks into gear.

The Raiders Are Buying In To Tony Sparano

At least that's what Ian Rapoport of the NFL Network is reporting:

For #Raiders: Interesting to hear how well received Tony Sparano has been. Players have been impressed with his speaking in front of them — Ian Rapoport (@RapSheet) October 12, 2014

Results might still be the telltale measuring stick for whether Sparano's time as Raiders head coach continues into the 2015 season. If he can band this group together over an extremely difficult stretch of schedule coming up, don't be surprised if his name is near the top of Mark Davis' list this offseason.