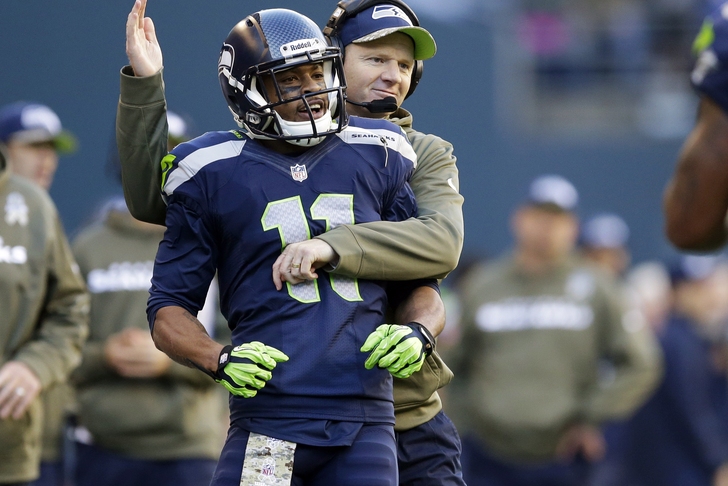 The Oakland Raiders are now in 'Plan B' mode after former San Francisco 49ers head coach Jim Harbaugh resisted the team's overtures to head back to his alma mater, the Michigan Wolverines. Where do the Raiders go from here in their coaching search? How does Tony Sparano fit into all of this? We look to answer these questions and more in our latest Raiders Rumors Roundup.

Bevell is one of the most coveted young coordinators in the game, and would be a tremendous get for the Raiders if they can convince him to come to the Bay Area - provided Oakland is willing to bypass other candidates with NFL head coaching experience.

Raiders looking to get some "Pep" in their step?

Hamilton might actually be the most desirable young candidate out there for Oakland, taking into account his work with budding superstar quarterback Andrew Luck. Raiders management appear interested in seeing if Hamilton can do similar things with another young & talented QB, Derek Carr, and any potential interview will likely be extremely Carr-centric.

What exactly does Pat Shurmur bring to the table?

Philadelphia Eagles offensive coordinator Pat Shurmur has been granted permission to interview for the Raiders' coaching job, but what exactly does the former NFL head coach have to offer?

Shurmur compiled a 9-23 mark with the Browns in 2011 and 2012, finishing in dead last in the AFC North both years. While he's been the offensive coordinator for two potent offensive schemes - the current-day Eagles under Chip Kelly and the 'Greatest Show on Turf' St. Louis Rams of the late 90s and early 00s - his offensive coaching talents didn't translate in his first NFL head coaching go-around.

Add in the fact that a lot of what Shurmur has been running in Philly is Chip Kelly's design, and it'd be a surprise to see Shurmur listed as a frontrunner for the Raiders job anytime soon.

Former Bill Belichick protegee Eric Mangini's name alone inspires groans for many New York Jets and Cleveland Browns fan, so you won't be shocked to hear that this next news wasn't received warmly on social media:

Mangini has five years of NFL head coaching experience, three with New York (25-25 combined) and two with Cleveland (10-22). He's had one playoff appearance (a loss), and is almost universally derided for not being able to match his bluster with results.

However, he is four years removed from his last job and it's possible he learned something in the interim. But, are the Raiders willing to take a chance on what could be a verifiable marketing disaster?

He may have gone just 3-9 as the team's 'interim' coach, but the Raiders showed signs of life under Tony Sparano - including winning their last three home games over teams then in playoff contention.

“All I want to do right now is be the head coach of the Raiders,” Sparano said. “So how badly? Very, very badly. This is my team. I left my team today and I’m looking forward to starting over again with them. Those decisions will be made down the road. As far as anything else with me goes, I only have one concern right now. It’s being the head coach of the Oakland Raiders.

“They all had to be willing to [buy in]. “We made some changes. We did some things in that way and I think that there’s a clear spark between me and the players and my message to the players here. I think that anybody that doesn’t see that isn’t really looking hard enough.

“I’m confident and I know the direction this is headed. I’ve done this before, not quite like this, but there has been a lot of work done here, right now, and by God I want that work to be for me, for this organization.”