Raiders Rumors Roundup: Could the Raiders Trade Darren McFadden to the Cowboys? 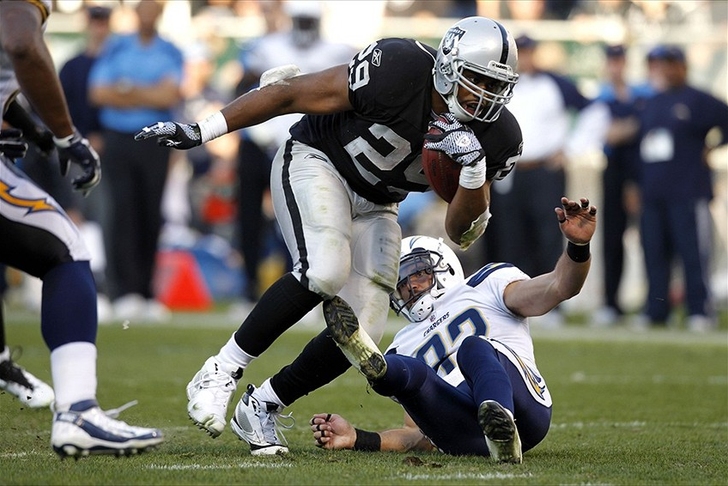 The Oakland Raiders are staring down one of the toughest decisions a front office can make—should they hold on to a star player—Darren McFadden—in the hopes that he'll re-sign with the team, or should they trade him now to avoid losing him for free?

On his day, McFadden is one of the NFL's best running backs. An explosive north-south force with the power to break tackles and the speed to reach the second level, Run-DMC has been a bright spot in Oakland during a tumultuous rebuilding period that's well into its eleventh year. McFadden is due to become a free agent after this season, and Raiders executives are privately doubting the team's ability to retain the player once his contract expires.

If McFadden is just going to leave for greener pastures after the season ends anyway, what's the point of keeping him around for the second half of the season? Realistically, Oakland's chances of a playoff appearance are slim-to-none in this season's loaded AFC West, so why not cash in on McFadden while he's still worth something?

The Raiders aren't outwardly open to trading McFadden, but we've heard that they'll listen to any offers that come in for the sixth-year player out of Arkansas. One team definitely interested in McFadden is the Dallas Cowboys, a team desperately trying to make the jump from 'good' to 'great'. Jerry Jones has been a fan of McFadden's ever since he was at Arkansas, and Jones will very likely contact the Raiders to open negotiations within the next 48 hours.

The main barriers to a McFadden trade will be compensation and fan reaction. The Raiders are on thin ice with the majority of their fanbase after years of mismanagement, and trading the team's one established star would undo any progress made by the emergence of Terrelle Pryor and the team's surprisingly decent start. Unless the Raiders get a deal good enough to keep the fans from open revolt, they'll be hesitant to pull the trigger.

Oakland GM Reggie McKenzie does care about keeping the fans happy, and shipping McFadden out does the exact opposite. He'll be reluctant to make this deal...unless Jerry Jones comes up with a fantastic offer. With that in mind, the Run-DMC trade threat level is...elevated.