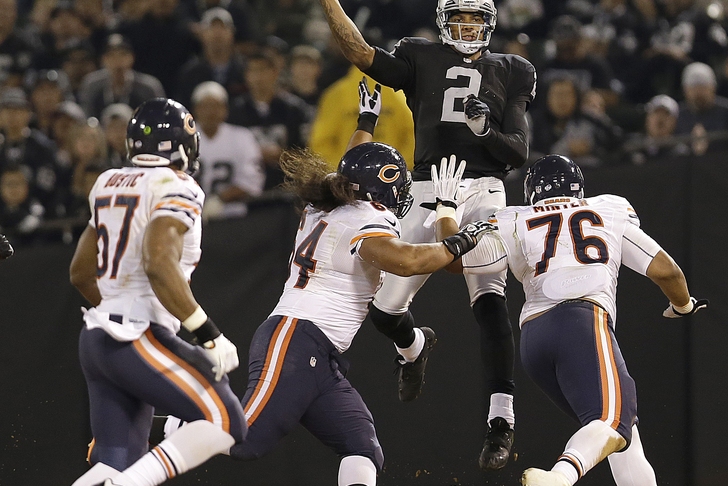 It is definitely the season for Raiders rumors to take flight, especially with the $66 million in cap space the Oakland Raiders have to play with this offseason.

One of the crucial questions left to be answered in Oakland is what the Raiders will choose to do at starting quarterback.

At this moment, Sports World Report and several other pundits are of the mind that the Oakland Raiders may be on the brink of trading 2013 Week 1 starting quarterback Terrelle Pryor to either the Philadelphia Eagles or Cleveland Browns.

The Oakland Raiders have been discussing the possibility of drafting a quarterback with the #5 pick in the 2014 NFL Draft, or signing a stopgap free agent quarterback option such as Michael Vick or former Raiders starting quarterback Josh McCown.

Whichever way the Oakland Raiders choose to go, trading Terrelle Pryor to the Philadelphia Eagles or Cleveland Browns would most likely function as a step toward a new era at starting quarterback in Oakland.

Terrelle Pryor is only slated to make $705,000 in 2014, with a cap hit of just under $1 million--meaning that potential draft picks or considerations would function as the Oakland Raiders' motivation rather than freeing up any space on an already clear ledger.

Injuries and a quarterback shuffle with former Penn State Nittany Lion Matt McGloin limited Terrelle Pryor to just 11 games with the Oakland Raiders in 2013. Pryor showed flashes in 2013 of the talent which helped him win the 2010 Rose Bowl MVP with the Ohio State Buckeyes, but was inconsistent and turnover-prone at his worst.

Pryor finished with 1,798 yards passing and a 57.4% completion rate. He threw 7 touchdowns, but also threw 11 interceptions along with fumbling 5 times.

Get Raiders rumors right at the source. Follow our Yankees team page today.