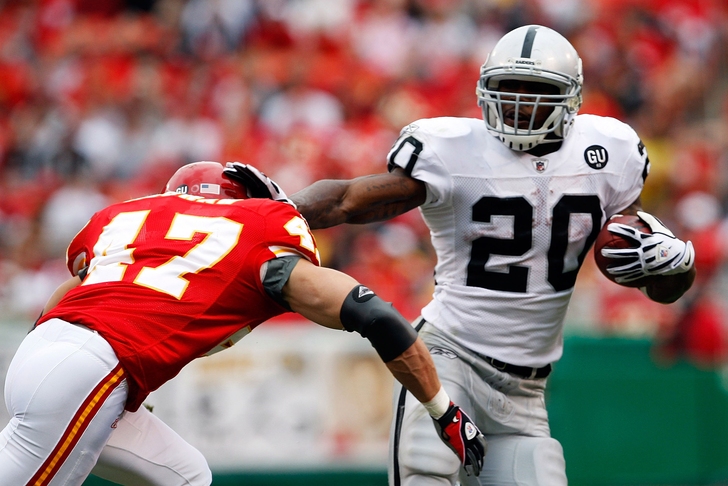 Raiders rumors may not have come together according to plan so far on this first day of free agency, however the Raiders' perceived "backup" plan at starting running back may not cost them all that much if things go south in 2014.

USA Today Sports NFL insider Tom Pelissero is reporting that the 1-year, $4 million deal which running back Darren McFadden just signed to stay with the Oakland Raiders has several incentives attached to it--

Earlier today, Oakland Raiders free agent running back Rashad Jennings signed on with the New York Giants, leaving the Raiders with what many assume to be Plan B.

Darren McFadden's injury history with the Oakland Raiders has been well-documented over the past three seasons, limiting him to appearing in just 29 of the Raiders' 48 games from 2011-13.

Yet, the former 4th overall pick of the Raiders in the 2008 NFL Draft is still only 26-years-old, and is just three years removed from being considered to be (at least) on the cusp of being a top-five NFL running back.

McFadden appeared in just seven games with the Oakland Raiders in 2013, rushing for just 379 yards on 3.3 yards per carry, along with five rushing touchdowns. McFadden did add 17 receptions for 108 yards, and if healthy, could still prove a versatile threat  for an Oakland Raiders offense in desperate need of playmakers.

However, as Raiders fans well know, that is a big if for a running back who, late in the 2013 season, lost his starting role outright to new New York Giant, Rashad Jennings.

Get to Raiders rumors, before they become yesterday's news. Follow our Raiders team page today.