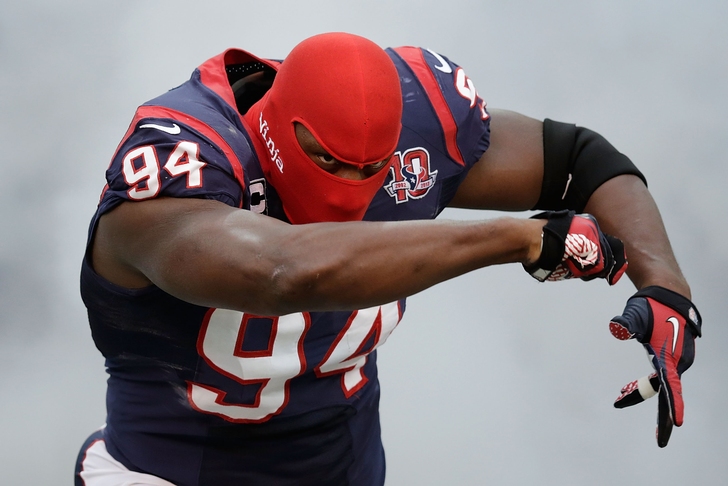 Raiders rumors are going absolutely bonkers with defensive signings over the past couple of the days.

With news just breaking moments ago that the Oakland Raiders have signed free agent CB Tarell Brown away from their cross-Bay rival, the San Francisco 49ers, you wouldn't think the Raiders would have another defensive upgrade in them today.

You would be wrong.

The 32-year-old Smith has been a consistent force over the entirety of his ten-year NFL career. He was even voted on to the AFC roster for the NFL Pro Bowl back in 2011.

Over his five seasons with the Houston Texans, Antonio Smith appeared in 79 of the Texans' 80 regular season contests. He started in 78 of those games, posting 25 sacks over that span and averaging roughly 23 tackles per year.

Signing Smith may signal the end of any thoughts that the Oakland Raiders would draft a defensive end such as Jadeveon Clowney, if he were to fall as far as #5 to the Raiders in May's NFL Draft.

"The Ninja Assassin" is the fourth new projected defensive starter that the Oakland Raiders have picked up over the course of the past 24 or so hours--adding DE Justin Tuck (New York Giants), LB LaMarr Woodley (Pittsburgh Steelers), and the aforementioned Tarell Brown.

After what was termed to be a deflating start to the 2014 NFL free agency period for the Raiders, the last day has breathed new life into Oakland Raiders general manager Reggie McKenzie's vision of a new era for the Silver and Black.

Get your Raiders rumors right from the source. Follow our Raiders team page today.