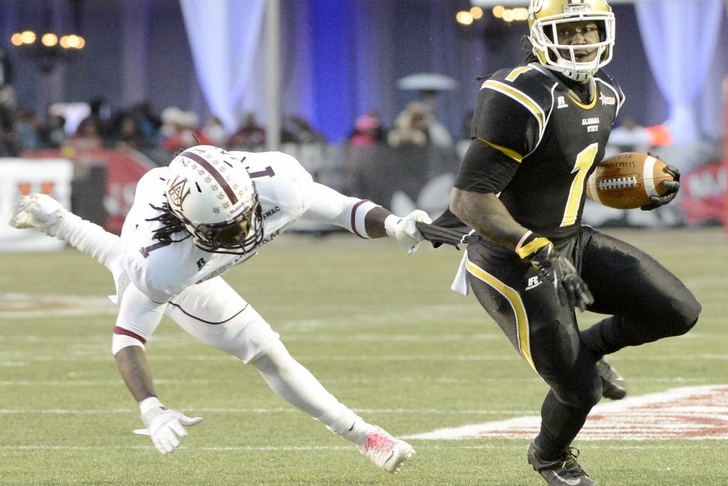 With Raiders rumors going nuts over the beginning of the NFL free agency period on March 11th, a very intriguing and controversial draft prospect may be on the Oakland Raiders' draft board.

Speaking with Alabama State University's athletics website, former Georgia Bulldogs running back Isaiah Crowell gave insight on the NFL teams who have interviewed him so far: "I have talked with the Browns and the Raiders and the Ravens I have talked to several times."

Isaiah Crowell was dismissed from the Georgia Bulldogs' football program after being arrested for multiple counts of felony weapons charges--despite the charges being dropped.

Crowell surfaced with the Alabama State Hornets of the NCAA's Division 1. In the Hornets' 12 games in 2013, Isaiah Crowell ran for 1,121 yards on just 170 carries--for a whopping 6.6 yards per rush.

The rumored Raiders target also ran for 15 touchdowns, showcasing an undeniable playmaking ability which has websites such as CBSSports.com dubbing Crowell as potentially "the best runner in the 2014 draft...from a purely talent standpoint."

Whether the stigma of his felony charges carries over to the NFL or not, the Oakland Raiders could end up an intriguing fit--especially if the Raiders cannot come to terms with incumbent running backs Rashad Jennings and Darren McFadden.

Get Raiders rumors straight from the source. Follow our Raiders team page today.