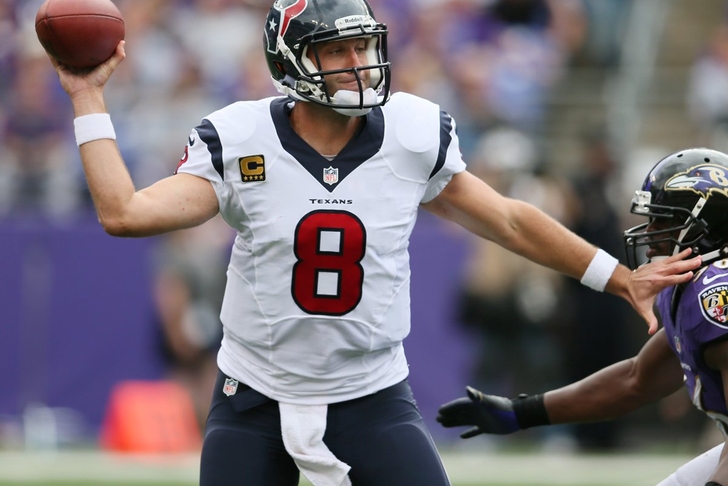 If you have been following Raiders rumors closely this week, you are probably already aware that the Oakland Raiders have tabbed Houston Texans quarterback Matt Schaub as their top target on the current trade and free agent market.

Today's developments in Houston may go a long way in making that a reality.

Per John McClain of the Houston Chronicle, the Houston Texans have just signed former Buffalo Bills and Tennessee Titans starting quarterback Ryan Fitzpatrick--perhaps signaling the end of Matt Schaub's time with the Texans--

Texans have agreed to terms with QB Ryan Fitzpatrick.

Several NFL sources are indicating that the Ryan Fitzpatrick signing is the first step toward the Houston Texans cutting Matt Schaub. If that rumors indeed proves to be true, the Oakland Raiders could use their roughly $30 million plus in remaining cap space to give Schaub a clean slate in Oakland.

The Cleveland Browns are also rumored to have significant interest in the 32-year-old two-time NFL Pro Bowler, yet the Oakland Raiders have been the name most bandied about in regard to landing Schaub.

Matt Schaub spent the first three years of his NFL career with the Atlanta Falcons in a backup capacity, before spending the last seven years with the Houston Texans.

Schaub has thrown for over 4,000 yards three of the past five seasons, but injuries and ineffectiveness derailed his 2013 campaign--and killed some of the good will built up with the Houston Texans fan base.

The potential Oakland Raiders target appeared in ten games for the Texans in 2013, starting eight (2-6 record). He finished with 2,310 yards passing, ten touchdowns and fourteen interceptions. His 61.2% completion rate marks the eighth straight year that Schaub has completed at least 61% of his passing attempts.