Raiders Rumors: Jim Harbaugh A Possible Target For Oakland After The 2014 Season? 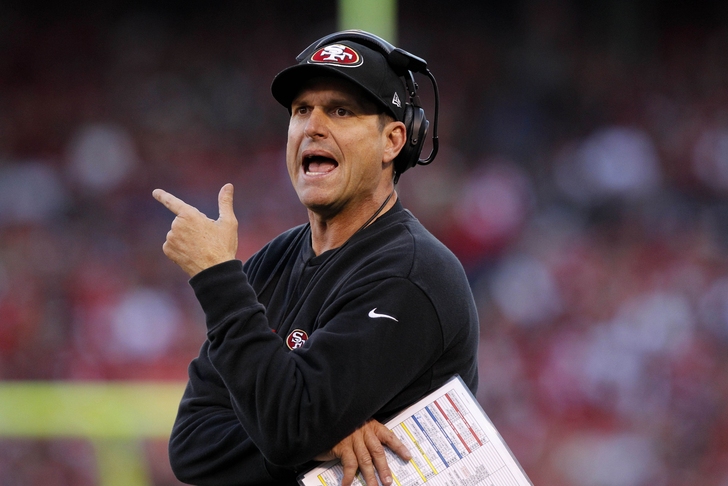 No one knows exactly how things are actually going to play out across the Bay, but it definitely seems like all is not well between San Francisco 49ers head coach Jim Harbaugh, his players, and the team's upper management.

If the 49ers fade out of playoff contention over the last three-quarters of the NFL season, it's possible that Harbaugh could part ways with the Niners for one reason or another.

If so, Tim Kawakami of the San Jose Mercury News sees a scenario where Harbaugh could find himself donning Silver and Black come 2015 - especially if the Raiders decide to take a look at current Eagles and former 49ers executive Tom Gamble as a potential replacement for suddenly-embattled GM Reggie McKenzie:

Obviously the 49ers part of the Harbaugh saga has to play out first, and that won’t all be known for months.

But if Harbaugh is available in January or February, there are reasons to think he’d at least talk to Mark Davis, especially if a colleague like Gamble (who was one of Al Davis’ closest NFL associates in Al’s later years) is ready to join the conversation.

First, Al Davis gave Harbaugh his first official coaching job (under Callahan in 2002) and Harbaugh has always held Davis in high regard. Second, Harbaugh loves the Bay Area and if he left the 49ers probably would love it even more if he won big right next door to the 49ers.

Kawakami does acknowledge that Harbaugh might be looking for a more "ready-made situation," but sees the presence of Derek Carr as a potential wild card in any hypothetical negotiation scenario.