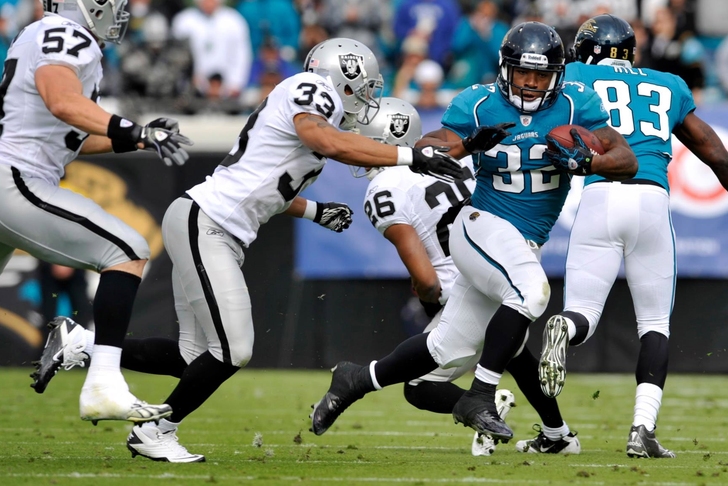 Raiders rumors have been filled with one big-named veteran signing after another this offseason. From the looks of it, the Oakland Raiders are in position to keep the ball rolling today with a huge addition to their running back corps.

Per CSNBayArea.com's Scott Bair, the Oakland Raiders and free agent running back Maurice Jones-Drew have agreed in principle to a three-year contract.

If Jones-Drew passes his physical later today and things progress as expected, the 29-year-old Bay Area native will formally sign on as a member of the Silver and Black later in the day.

Just two years removed from leading the NFL with 1,606 rushing yards, Maurice Jones-Drew is looking to bounce back from a two-year dip in production caused by injury, weight gain, and being keyed on by opposing defenses for a lackluster Jacksonville Jaguars squad.

The potential newest Oakland Raiders starting running back posted a career-low 3.4 yards per carry in 2013, while still managing to produce 803 yards and 5 touchdowns.

Jones-Drew has lost fifteen pounds this offseason, looking lithe and ready to reassert himself as a consistent threat at the tailback position.

He would most likely vault to number one on the depth chart at halfback ahead of the injury-prone Darren Mcfadden, who recently signed an incentive-laden one-year contract to remain with the Raiders.

Get Raiders rumors when you want them, where you want them. Download our Chat Sports IPhone app today, and follow our Raiders team page.