Raiders Rumors: Could We See Marshawn Lynch In Silver And Black In 2015? 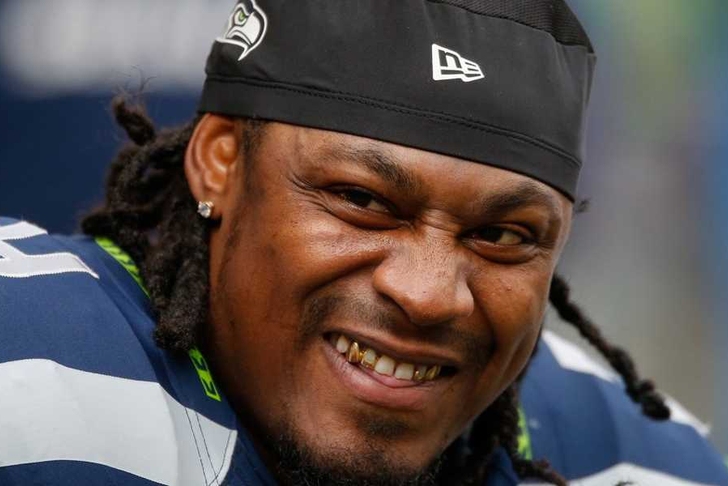 The Oakland Raiders made some solid free-agent signings last summer, adding Justin Tuck, Antonio Smith and a handful of other established names as they continued their rebuilding efforts. While those signings turned a few heads at the time, they were nothing compared to what the Raiders have in store for this coming offseason.

The 2015 season will be GM Reggie McKenzie's third with the team (despite rumors he could be axed, it sounds like he'll be getting another season to show progress), and team owner Mark Davis is ready to see some results. Oakland's running game has been a major weakness this season, and while Latavius Murray has shined in limited playing time late in the year, he can't carry the backfield on his own.

The Raiders are expected to jettison the ineffective Darren McFadden, whose one-year contract expires at the end of this year, and Maurice Jones-Drew is likely done in Oakland as well after gaining just 96 yards in eleven games this season.

Enter Marshawn Lynch. The Seahawks RB is due $8.5 million next season, but the Seahawks are in very delicate cap territory, with new contracts expected for several key contributors. Back in October, a report that Lynch wouldn't be back in 2015 made the rounds, and while his recent performances have turned heads around the league, not much has changed behind the scenes in Seattle. The Seahawks have a ready-made replacement waiting in the wings in Christine Michael, and NFL.com's Ian Rapaport expects the Seahawks to take another RB in the upcoming draft.

.@RapSheet: "I would not be surprised if the Seahawks took a RB very early in the draft and essentially replace Beast Mode on their roster.”

Can the Raiders afford Lynch? Absolutely - the Raiders are in one of the best cap situations in the league. Can Lynch still produce? If his performance against Arizona is any indication, he certainly hasn't lost a step. Lynch still has a number of fans in the Bay Area from his playing days at UC Berkeley, and there's no doubt he still has plenty of love for the city of Oakland (he was also rocking an Oaklandish beanie after Sunday's game).