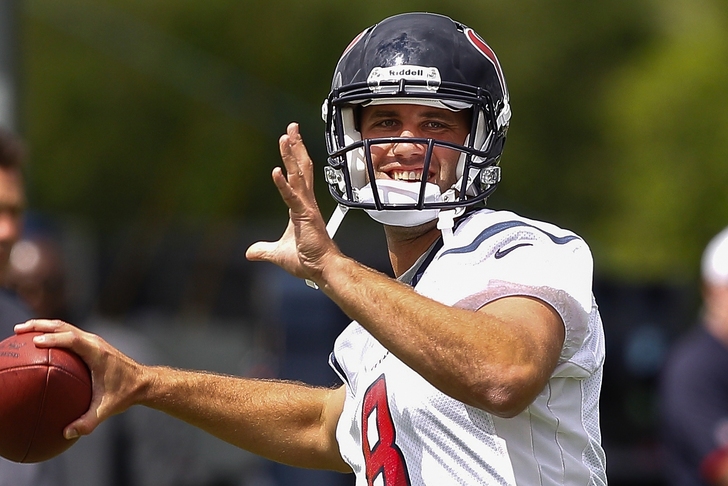 The depressing Raiders rumors which surrounded the first 24 hours or so of the 2014 NFL free agency period seem like ages ago.

With the acquisition of former Houston Texans starting quarterback Matt Schaub via trade today, one of the Oakland Raiders' most respected veterans is just as excited as the fan base seems to be.

Reported by Vic Tafur, Raiders beat writer for the San Francisco Chronicle, recently re-signed safety Charles Woodson gave an outsider's perspective on the NFL career of Matt Schaub up to this point--“I think he’s had a very solid career. I think people look at Schaub and only look at his last year," Woodson stated. "I think they base his career off of his last year. But, I see a guy that, in my opinion, has been very steady.

Fighting injury and a quarterback controversy which saw former Houston Cougars quarterback Case Keenum get the nod over him on a couple occasions, 2013 was an undeniably dismal year for the 32-year-old Schaub.

In 10 games (eight starts), Schaub posted just 2,310 passing yards and ten touchdown passes--both his lowest totals since his first full season as a starter for the Texans in 2007.

Despite all of this, future NFL Hall-of-Famer Charles Woodson seems convinced that the Oakland Raiders provide an excellent opportunity for Schaub to return to former glories--

"He’s done some really good things throughout his time. Sometimes you just need a fresh start, a new set of circumstances to restart, to restart your history. Hopefully this is the place that he can get it done. I know he’ll help us win, that’s one thing for sure. A veteran player, he’s been around for a long time, and he knows how to win games. He’ll help the team win.”

If he can "help the team win," Raiders fans will make sure that the two-time NFL Pro Bowler forgets all of the troubles which plagued him in 2013.