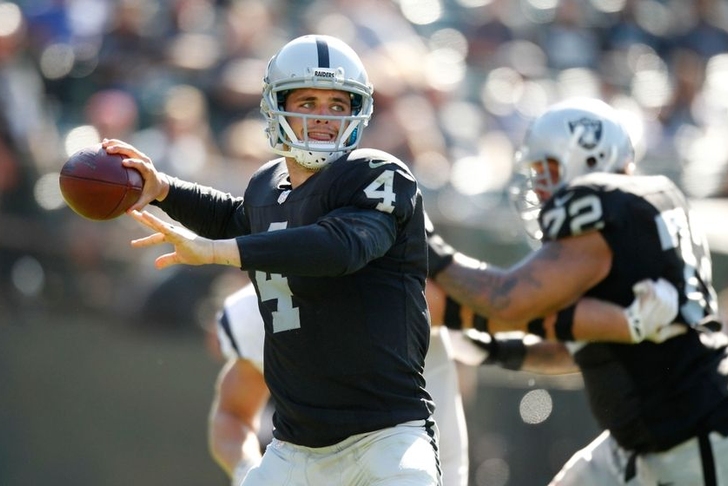 The Raiders aren't winning, but through two quarters they've done a better job of containing New England than most expected. The Patriots are looking solid, but they'll be frustrated that the Raiders are still in striking distanceHere's what we saw in the first half:

Derek Carr Is The Right Guy In Oakland

Carr has lots of room left to improve, but he's flashed some impressive potential so far. The mistakes have been there, but more rarely than we saw from Oakland's previous (and less raw) QBs. It won't happen overnight, but Carr has all the tools to be an elite quarterback in this league.

New England's Passing Game Isn't Back To 100% Yet

Even in parts of last week's game against the rapidly disintegrating Vikings, New England's passing game looked out of sync. It wasn't until late in the second quarter that the Patriots got on the board against Oakland, and it'll take some time to re-establish the chemistry this unit had two years ago.

Ball Security Has Been On Point

Neither team turned the ball over in the first half, which has to be encouraging on both sidelines. The Raiders had a terrible time with turnovers last week against Houston, and taking care of the ball isn't optional against a team like New England.

Rob Gronkowski still isn't back to top form, but his first-half touchdown shows he's already good enough to make the difference. Look for Tom Brady to look his way again in the second half.