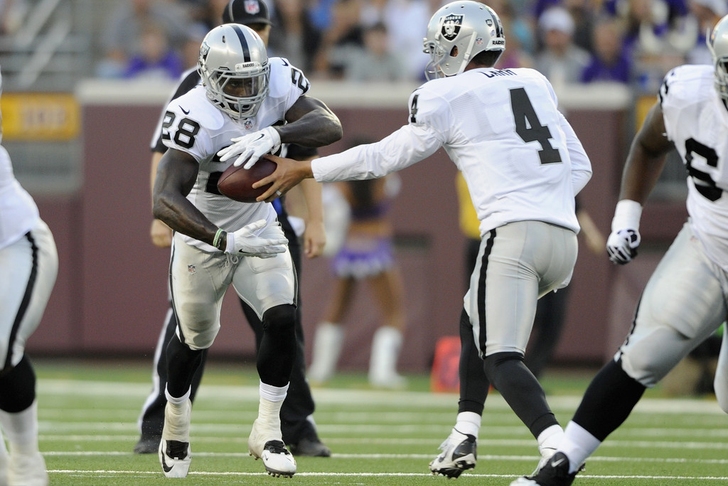 The Oakland Raiders' run game struggled once again for most of the team's 13-6 loss to the San Diego Chargers on Sunday, gaining just 23 yards on 12 carries through almost three quarters of football.

From there, the Raiders gave third running back Latavius Murray a look, and he proceeded to almost double the team's entire rushing output on his first two touches (37 yards).

"We're trying to get him more involved," interim head coach Tony Sparano said after the game, via Levi Damien of SBNation. "Obviously he was involved more in this ball game than we've seen him in the last couple ball games."

Murray finished with just four carries for 43 yards. In comparison, Darren McFadden and Maurice Jones-Drew combined for only 27 yards on a total of 12 carries.

"It's tough," said Murray. "I think it's tough for everybody. Everybody wants to play. I know I want to play, get in there, so I just gotta be patient and when my number is called just make sure I know what I'm doing and make sure I go out there and execute."

"They've just been wanting to try to get me in the mix a little more and that's all I can ask, and when they do, just make sure I give them more reason to want to put me back in there."

Murray did just that on Sunday, and he could very well take on more of the load come Thursday against the Kansas City Chiefs.