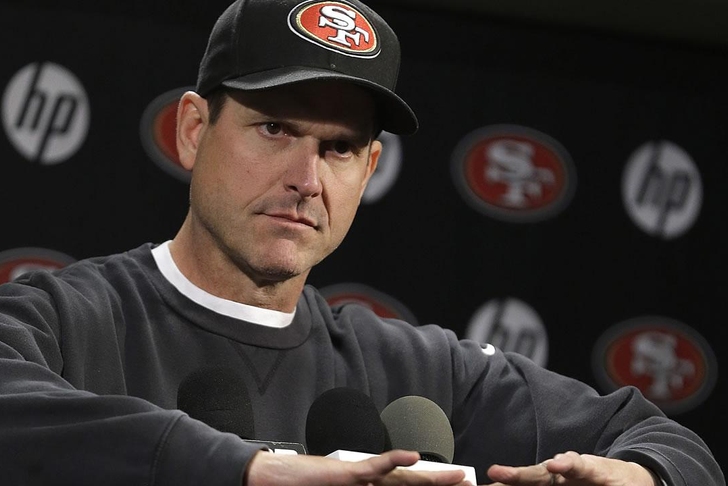 The Oakland Raiders are now 1-11 on the 2014 NFL season and are currently left picking up the pieces after an embarassing 52-0 road loss to the St. Louis Rams on Sunday.

With just four games to go until what is likely to be a tumultuous offseason for the franchise, rumors of a potential trade for San Francisco 49ers head coach Jim Harbaugh are intensifying.

ESPN's Adam Schefter, citing sources, indicated early on Sunday that the Raiders (and the Jets) are interested in trading for the polarizing Harbaugh. However, if Oakland is successful in their pursuit of a deal, the San Jose Mercury News' Marcus Thompson II believes that such a move will come with a casualty - the job of general manager Reggie McKenzie:

It stands to reason that high on Harbaugh's demands would be handpicking the general manager. But a hot young GM candidate -- like Philadelphia's Tom Gamble, who worked with Harbaugh, or Kansas City's Chris Ballard would be tough to pry from the good franchises that made their names hot. A proven and experienced personnel man -- such as Scott McLaughlin, formerly with the 49ers, or Scott Pioli of New England fame -- wouldn't be intrigued by the Raiders' nearly empty cupboards.

Judgment of the Raiders' talent pool aside, a Harbaugh trade (or a splashy move for any experienced head coach) might signal the end of McKenzie's tenure with the Raiders. Whether McKenzie is working on borrowed time regardless is still up for interpretation.