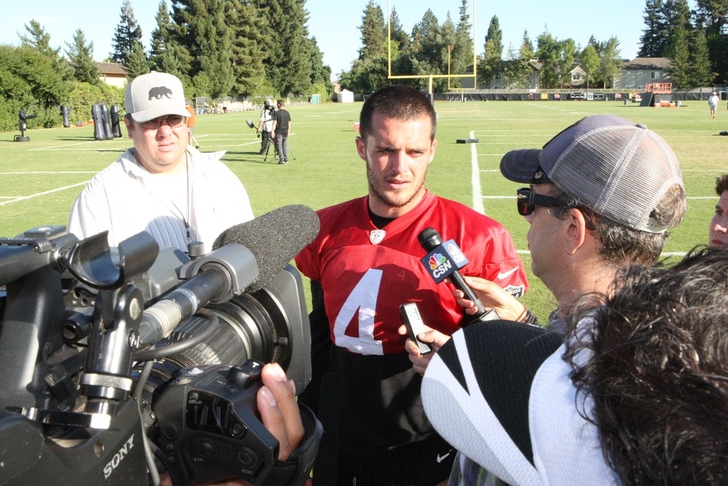 In this Raiders news and rumors update, NFL analysts are prone to jumping to conclusions - especially in the seven-day lull between Week 1 of a season and Week 2.

After Derek Carr showed flashes last Sunday of the skill set that has had Oakland Raiders fans and officials alike dreaming big, Stephanie Stradley of the San Francisco Chronicle asked RaidersBlog.com owner Christopher Hansen if Carr has a chance to escape the troubles of recent Raiders QB draft picks:

“He has a very good chance because he’s got a good head on his shoulders and the talent to go with it. Perhaps because Al Davis had so much success with Jim Plunkett, the Raiders actually haven’t churned through many top draft picks at quarterback. Of course, they haven’t drafted a successful starter in the first or second round since Ken Stabler in 1968, so they’ve still had their fair share of busts.

The Raiders have invested in talented quarterbacks before, but none were like Carr in terms of having the total package. Al Davis often ignored off-the-field flaws in pursuit of physical talent. That’s why the Raiders drafted busts like JaMarcus Russell and Todd Marinovich, but Carr has the cannon and the work ethic needed to be successful in the NFL.

One thing the Raider Nation does have to worry about with Carr is the leadership in Oakland changing. If owner Mark Davis cleans house after the season, the people that drafted and believe in him will be gone. That kind of change alone can create a vortex of doom for a young quarterback. Time will tell.”

With sixteen weeks left in the NFL regular season, Derek Carr could go a long way towards proving his long-term value to the club by making these next four months something to believe in.