Raiders 2014 NFL Draft preview: Which quarterback should the Raiders target at #5? 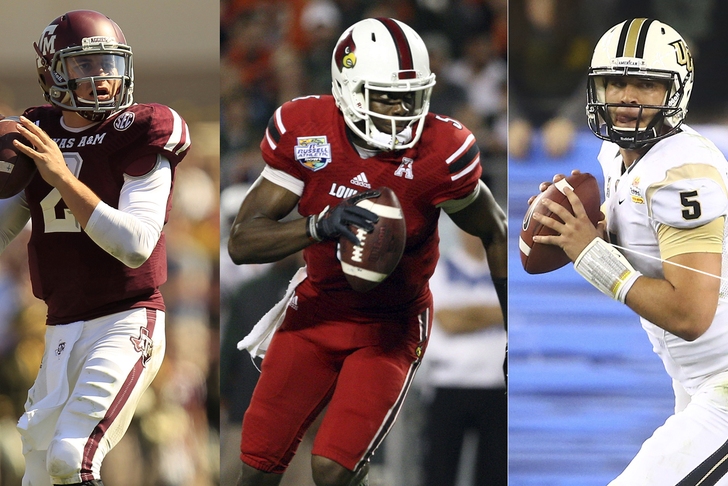 In fact, welcome to the first year since the 1998-2001 span (and the Three's Company hijinks of Chucky, Gannon, and a man named Al) that a head coach has lasted past the dreaded second year of doom doom doom doom...

Over the past two years, the Raiders are just eight games better than a mortuary prep squad, going 8-32 for a winning percentage of .200.

Usually, you don't want your professional sports team's winning percentage in the same neighborhood as Ted Williams' career batting average territory (.344 for you Splendid Splinter die-hards)--let alone the batting average of a converted pitcher in the Arizona Fall League.

Yet, here's the rub:

The Oakland Raiders are now firmly out from under the $49 million in dead cash that was literally handed out to the ghosts of Carson Palmer, Richard Seymour, Darrius Heyward-Bey, Michael Huff, Tommy Kelly, and Rolando McClain.

Let's do this, Oakland. Picard is counting on us.

Now, we can speculate till our lips fall off about who the Raiders will target in free agency--by the way, if Josh Freeman knocks, tell him the Raiders moved to Alberquerque, OK?

However, the first legitimate step to rebuilding the Silver and Black's brand is hitting the lottery with the #5 pick in what looks to be the most loaded NFL Draft in arguably a decade or so.

So, each of the next five weeks, we will target the perfect candidate for the Oakland Raiders at each of their three most glaring positions of need (quarterback, wide receiver, defensive tackle) along with an offensive and defensive X-factor pick (the guy whose athletic ceiling and certain "something" makes him a perfect fit in the Black Hole.

This week, we start with the position with the biggest perceived impact in turning an entire franchise around--

Who is the quarterback the Raiders should build their future around? Bridgewater? Bortles? Manziel? Purple Drank?

Bridgewater may be the odds-on favorite to fall to the Raiders at #5, as his draft stock has fluctuated almost daily.

Manziel may have the X-factor, outsized swagger, and a kill-a-(bleep) mentality.

However, ladies and gentlemen of the jury, Blake Bortles is the only quarterback out of those three who is a real-deal NFL starting quarterback right now.

He has an NFL-ready build, packing 230 pounds onto a 6-foot-3 frame. His release point is startlingly advanced for his age, and won't need the same amount of corrective reps as Bridgewater's submerged point of release will.

He is a rhythm quarterback who doesn't sacrifice accuracy when on the move, showing poise against the blitz and the zone almost equally. While he isn't as dynamic as Manziel on the run, the three-inches and 30 pounds that he has on Manziel will open up a ton of sight-lines that won't be there for Johnny Football at NFL speed.

Bortles' track record off the field is sterling, as everyone who watches the kid prepare throws around the word "professional" as though they were looking for Scrabble points.

There is no discernible emotional and peripheral baggage to sift through, and his familiarity with a pro-style offense means that, with the right talent drafted and signed around him, the Raiders could very well win sooner rather than later with Bortles under center.

His deep accuracy and arm strength aren't quite there yet, but the same goes for Bridgewater (who loses touch consistently on deep routes) or Manziel (who, ironically, needs a timing-based, limited offense to showcase his kamikaze skill-set.)

However, Bortles can run, (15 of his 71 career collegiate touchdowns were runs) and can hit every short-to-deep medium throw in any tight window you can imagine.

From a comparative standpoint, he is the gem of the 2014 first-round quarterback trifecta if he were to somehow fall to the Raiders, or they :gasp: make a trade.

Now, I wouldn't hesitate too much on picking up Bridgewater at #5, as long as the injuries he has sustained to his wrist and ankle aren't indicative of things to come (and if the Raiders wanted to embrace a traditional power run attack,) but I would leave Manziel flat.

Hell, I would even trade down for Tajh Boyd over Manziel if the Raiders are willing to work on the hitch in his throwing motion and find adequate skill position players via free agency and the Draft to hide his limited ability from hash-to-opposite sideline.

No offense to Johnny Football, but there is a faint whiff of mini-Leaf on him that scares the piss out of me.

Let's hope he Favres it up and proves me, and his detractors, wrong as wrong can be.

Next week, we will take a look at which game-changing wide receiver NOT-JOSH-FREEMAN would love to have as his primary target.

Until then, it's time to Re-commit To Excellence, Raider Nation.