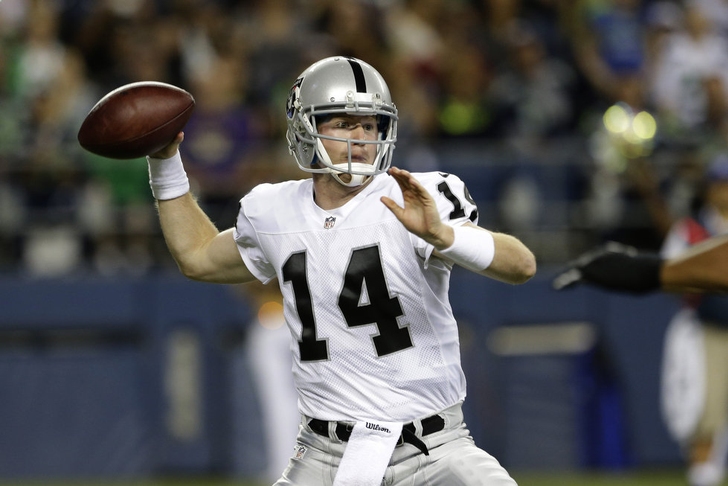 Oakland Raiders QB Terrelle Pryor played with a knee injury in last Sunday's loss to the New York Giants, and it appears to have aggravated the injury to the point that he may have to sit out Oakland's next game.

Pryor sprained his medial collateral ligament against the Philadelphia Eagles on Nov. 3. Although he practiced and played on the injured knee Sunday, doing so may have made things much worse, and the limitations caused by the injury were obvious to Raiders coach Dennis Allen.

"It was obvious that there wasn't that explosiveness that we had seen out of him prior to the injury," Allen said.

Pryor was held out of practice on Wednesday with Matt McGloin getting the first-team snaps, and if Pryor is unable to make strides in his recovery, McGloin will be the man under center next Sunday against the Houston Texans.

McGloin, an undrafted rookie out of Penn State, is currently the only other quarterback on the Raiders' active roster. Fourth-round pick Tyler Wilson is currently on Oakland's practice squad, but could be moved up to the active roster if it looks like Pryor won't be ready to go. The Raiders currently have an open slot on their 53-man roster after waiving offensive lineman Jack Cornell.

Chat Sports has the most complete Raiders coverage available anywhere on the internet. Sign up for a free account today, and never miss a Raiders story again.