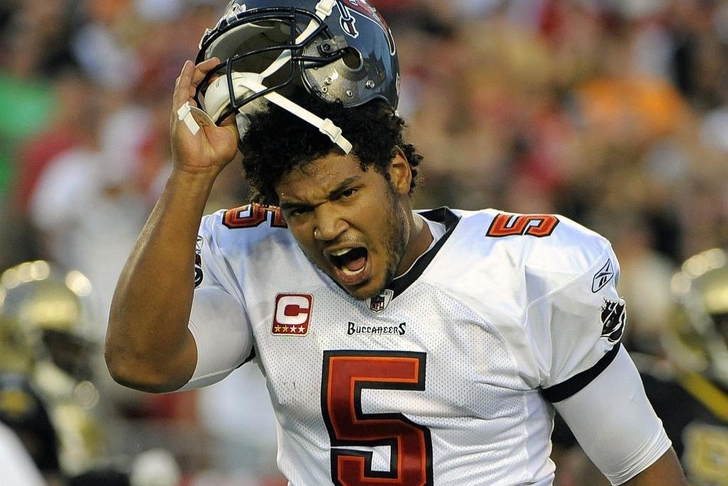 After a messy divorce with the Tampa Bay Buccaneers, QB Josh Freeman is now a free agent. The 25-year-old QB out of Kansas State was labeled as the NFL's next big thing just three years ago, and he put up some gaudy numbers (25 TDs with just 6 INTs) in 2010, during just his second season as a pro. Despite regressing over the next few seasons, Freeman still has intriguing potential, and with Oakland's QB situation still uncertain moving forward, could the Raiders make a play for Freeman?

While Terrelle Pryor has flashed some impressive potential so far, it's still too early to label him Oakland's QB of the future. Even if Pryor stays healthy and continues to excel, the Raiders are still thin behind him - undrafted rookie Matt McGloin is currently the Raiders second-stringer, and it's highly likely that Matt Flynn won't play another down with the Silver & Black.

Freeman has the raw talent to be a starting quarterback in the NFL, but he isn't good enough to come in and start right away over Terrelle Pryor. Still, the Raiders haven't ruled out making a move for Freeman, who would be available on the cheap with Tampa Bay footing the bill for almost all of his $5.95M salary this year.

Freeman can't take off and run like Terrelle Pryor, but he's certainly more mobile than Matt Flynn (to be fair, so are most kitchen appliances). Freeman's pocket awareness is solid, and while his decision-making hasn't been on point since his huge 2010, at 25 he still has plenty of time to mature and improve. The biggest asset Freeman brings to the table is his cannon of an arm - he can bomb passes around the field like he's throwing a baseball, and he can definitely put the ball in places where guys like Rod Streater could make plays.

The Raiders could end up as suitors for Freeman thanks to the influence of their offensive coordinator, Greg Olson. Olson was the OC in Tampa Bay from 2009-2011, when Freeman was still one of the NFL's top young quarterbacks. After Thursday's practice, Olson told CSN Bay Area how disappointed he was to see the QB released:

“It was unfortunate, for me, to watch what happened in Tampa really over the last couple of years." Olson said. "I’ve always had the utmost respect for him. I think he’s a great player."

So, what are the odds we could see Freeman in a Raiders uniform this season?

From everything we've heard, the Raiders are curious, but not ready to make a concrete offer. Oakland's front office is legitimately impressed with Matt McGloin, and as amazing as it sounds, there were a few members of the staff who thought McGloin should have started over both Flynn and Pryor in week one. McGloin's presence will deter the Raiders from moving for Freeman unless Terrelle Pryor gets injured again, and with Flynn still on Oakland's books (for now) there won't be room for the former Bucs QB - not yet, anyway.