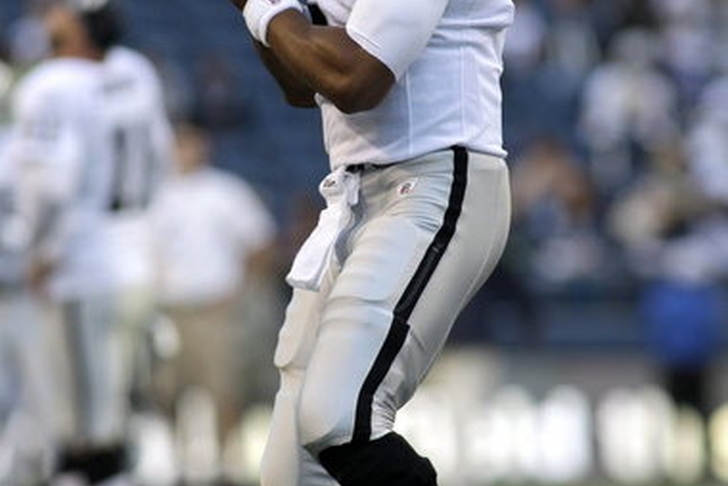 Oakland started well, scoring their opening touchdown just four minutes into the first quarter, but the pace slowed and the team was limited to one field goal for the rest of the opening half. Fortunately for the Raiders, Jacksonville's offense was as anemic as ever, and the Jaguars only put together one decent drive (resulting in a field goal).

Oakland started out the third quarter on offense, and it looked as though they'd been forced into a punt until one of Jacksonville's players lined up in the neutral zone, giving Oakland a first down.

Darren McFadden responded to the second chance by ripping off his longest rush of the day, a 30-yard spring into open space up the middle. The Raiders were set up at the Jacksonville 15, but were unable to make further progress - the ensuing Sebastian Janikowski field goal extended Oakland's lead to 13-3.

Jacksonville's offensive woes continued on their next possession - a penalty on first down sent them back five yards, and after two plays that gained no positive yards, a short third-down pass wasn't enough to move the chains. Jacksonville was forced to punt once again - their fifth of the afternoon.

The Brian Anger punt was a beauty, and would have rolled all the way to the Oakland 1 or 2 if former Michigan QB Denard Robinson (not a special teams veteran, clearly) hadn't touched it at the 11.

Jacksonville started bringing more pressure on Pryor, and it paid off - they finally forced Oakland into a three-and-out on their next possession. While the defense looked to be stepping their game up, the offense was somehow going backward, and they gave the ball back to Oakland after another two-minute three-and-out.

The quarter ended with Oakland driving deep into Jacksonville territory after another impressive McFadden run - at the end of three, it's Oakland 13, Jacksonville 3.