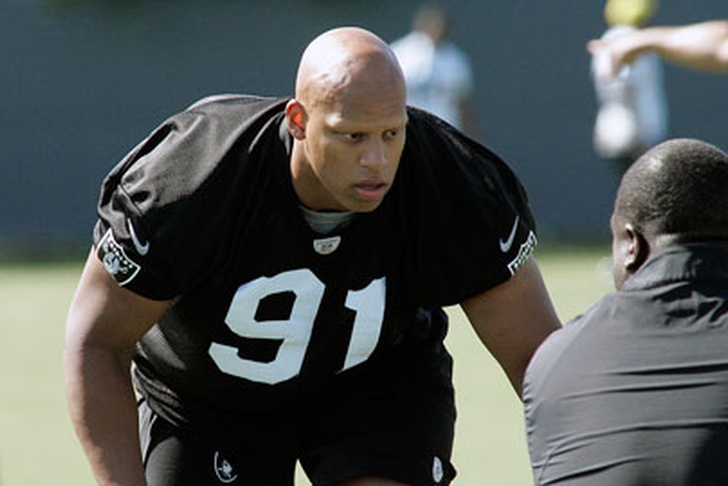 At halftime of Friday’s Raiders-Saints game, things looked dire for the Silver and Black. A late Matt Flynn drive had put a thin layer of gloss on a 23-7 scoreline, but the Raiders had looked largely abysmal on both sides of the ball.

Everything changed in the third quarter, thanks to Jack Crawford and David Bass.

Crawford, a second-year defensive end out of Penn State, absolutely dominated the Saints second-string offense. He was everywhere – after laying a huge hit on the kick returner, he stayed on the field and immediately dropped Saints quarterback Seneca Wallace for a sack. He followed that up with a key tackle for a loss, and after an incompletion (due to pressure by Crawford) the Saints were forced to punt - their first non-scoring drive in the entire game.

Crawford wasn’t done. During the Raiders’ next defensive sequence, he showed excellent awareness to recover a fumble (forced by Brandian Ross) that gave the Raiders the ball at their own 43 yard line.

Terrelle Pryor was unable to capitalize on the turnover, but the defense was unfazed. After a holding penalty put the Saints deep in their own territory, Bass forced another fumble, which Ryan Robinson scooped up and ran in for a touchdown. On the ensuing kickoff, Crawford (still bleeding from a cut on his elbow from the first half) laid another big hit on the Saints’ returner.

The Raiders defense is going to need to create turnovers this year if the team wants to be competitive, and Dennis Allen needs to start the players who can make things happen, regardless of seniority.

Starting right DE Jason Hunter hasn’t played an NFL game since 2011, and so far in the preseason he hasn’t done much to stand out – Crawford’s impressive display should earn him some playing time with the first unit. At the left DE spot, David Bass is currently listed as a third-stringer, but he should also be moving up after his performance Friday.

At the end of the third quarter, 23-7 had turned into 23-17. The Saints held on to win 25-20, but after the first quarter the Raiders outscored New Orleans 20-6. The Saints are an excellent team, but letting up 17 points in the first quarter is unacceptable, no matter the circumstances. The first string defense needs to improve in a hurry.

Oakland seems unable to make it through a quarter of football without another player going down with injury, and the emergence of players like Crawford is a huge boost to Dennis Allen’s hopes of fielding a competitive team. The depth chart will continue to fluctuate over the next two preseason games, but barring some miraculous turnaround for Jason Hunter, Jack Crawford should start in Week 1 against the Colts.