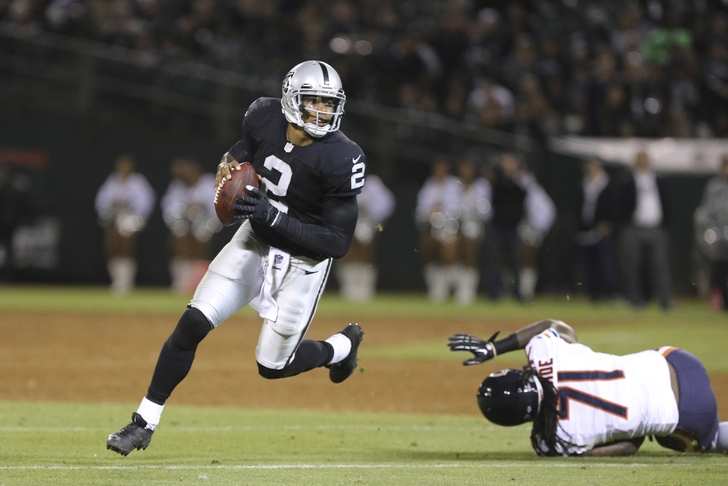 Sunday's game against the Eagles is what happens when one team (the Raiders) doesn't realize that the game will be contested under special Arena Football League/pinball hybrid rules.

The Eagles had ten drives in the first three quarters of their 49-20 demolition of the Raiders' secondary. They scored touchdowns on seven of those drives.

Now, it would be easy to return to caustic pessimism after watching the Eagles cover the O.Co Coliseum in Chip Kelly-induced bird-squirts. The Raider team that looked beyond over-matched for the majority of Sunday was the exact team that was supposed to be vying with Jacksonville in the Going Down for the Clown(ey) sweepstakes.

Maybe that name needs a bit of work. But, the sentiment is clear; the Raiders are ahead of their perceived schedule of suck. If anything, this is cause for just a bit of levity and perspective.

The Raiders are currently 3-5, and a game and a half out in a muddled mediocrity skirmish in the AFC for the sixth spot. Despite Sunday's debacle, this is a Raider team that is just a magic time-machine Tupperware containing a couple lucky plays away from being 5-3 or 6-2.

So, with the benefit of YouTube, we are going to chronicle and clarify the inconsistent and  relatively indefinable first half of the Oakland Raiders' 2013 season.

Because, in reality, there is no reality to the passing game...yet.

Terrelle Pryor is a hell of an athlete (his current day-to-day tag on his knee notwithstanding,) and we will cover the essential nature of his jet engine when we get to the running game. However, as of right now, the Raiders are stuck in a majority of two wide, double-back and tight sets because the receiving core is extremely shallow from a depth perspective.

Rod Streater and a rejuvenated Denarius Moore make for a pretty solid 1-2 punch, but the Brice Butler/Jacoby Ford/Juron Criner muddle behind them is not nearly enough to pull the passing game out of its current role as being a decoy for the running game.

The Raiders currently sit at 30th in the NFL with 197.8 passing yards per game, and have thrown just 7 touchdown passes against the 17 which their opponents have thrown against them. This ratio must improve significantly for the Raiders to make a legitimate run this year.

Is it weird that I hear the Freddie Mercury "ahhhhh" that comes at 0:57 every time I watch Terrelle Pryor roll out, turning dead plays into possible game-changers? I probably need more constructive hobbies.

The palpable excitement that has been brought up by several major news outlets in regards to a rejuvenated O.Co Coliseum is directly attributed to Terrelle Pryor, DMc (in flashes,) Rashad Jennings, and the rest of the Raiders 4th-ranked running attack.

Pryor is second on the team in rushing attempts (63,) and has converted those attempts to a team-best 485 rushing yards, giving him an insanely stellar 7.7 yard/carry average. This is far and away the best yard/carry average in the NFL. Russell Wilson sits in second place at 5.6 yards/carry, a full 2.1 yards less than Pryor.

The underdogs are keeping the Raiders alive. Aside from Lamarr Houston, this Raiders front-seven was supposed to be a patchwork ball of nothingness which teams could gash at will en route to vying for being the first team to crack 100 points in an NFL game.

Reality shows a front seven committed to sustaining pressure (2nd in the NFL with 32 sacks,) and closing gaps/playing correct angles in the running game (6th in the NFL with just 94.6 rush yards allowed per game.)

The trick is making this success sustainable will be seeing which members of this collective of one-year contracts are necessary long-term cogs going forward into 2014.

Every passing attack which has shown a modicum of athleticism mixed with a healthy dose of speed (hello Philly, Denver, etc.) has caused mass confusion amongst the Raiders' back four.

Now, don't get me wrong...they have done an admirable job working within these limitations of talent and focus. But, the next step is trading for/signing/drafting legitimate depth at corner and both safety spots. (Or just pretending Asomugha is the same guy he was in the way back when.)

"It's just the wasted years so close behind." RIP Lou.

The immediate past still looms close behind the Raider franchise. A couple of wrong moves could bring the Raiders back to the clown table attempting to run fly patterns with floppy shoes and four pounds of makeup on each receiver's face.

However, there is room for guarded, whimsical optimism here. If Dennis Allen can escape the inevitable questions, and Reggie McKenzie can continue to assist in completely restructuring the locker-room culture in Oakland, then there is enough hope to believe and believe with passion.

This should be, and has been, more than enough to make Sunday mornings hurt a lot less than they have in the past decade.

Other articles by Justin Lee:

Jason Tarver's "eff you" moment could be big for the Raider Nation.

The Raiders are primed for a playoff push within 14 months.