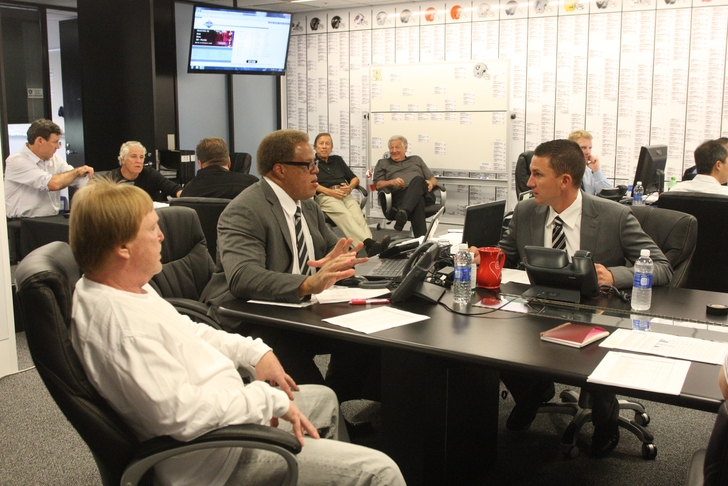 It is easy to forget that if the 2013 Oakland Raiders won at home against the Tennessee Titans in week 12, they would have been 5-6 - and Raider Nation would have owned the AFC's sixth seed with five weeks to play.

As things tend to do, things went to...

Leading 19-16 with 6:10 to play in front of a raucous O.Co Coliseum (after a fadeaway 27-yard Matt McGloin TD strike to Marcel Reece) , the Raiders' secondary proceeded to contract a deadly case of the cooties--inexplicably missing assignments and playing the softest 2-ply Charmin coverage an NFL secondary could possibly play.

Game over. Season over.

The Raiders would lose their next five by a margin of 15 points per game, giving up 31 points or more in four of those contests. Hello, top-five pick.

1. Offensive Tackle (and offensive line in general): Oakland's pass protection was actually pretty damn good in 2013...in the first three quarters of games, at least. The Raiders gave up just 21 total sacks in quarters 1-3 of their 16 regular season contests--much better than league average. Unfortunately, conditioning and lack of focus cost the Raiders dearly late in games, with the Raiders' O-line giving up an astounding 24 sacks in the 4th quarter of games--over double the NFL average. Getting younger and more technically sound/focused at offensive tackle (here's looking at you, Khalif Barnes) is the only way that whoever ends up under center in 2014 will have a legitimate chance to succeed.

2. Defensive End: If the Raiders fail to re-sign LaMarr Houston, this becomes priority 1b. The Raiders struggled to maintain a consistent pass rush with and without Houston (who led the team with six sacks). The Raiders finished just 18th in total sacks, and finding a disruptive end early who can force opposing quarterbacks into mistakes will be crucial if they want to improve their pass defense, ranked 28th in the league in 2013.

3. Wide Receiver: Rod Streater's emergence as a solid, albeit unspectacular threat is heartening. Denarius Moore and Jacoby Ford have both shown great flashes, but injuries and stone hands leave the Raiders in desperate need of a playmaker. You could, after a drink or two, talk me into drafting the most talented wide receiver on the board at #5, and then attacking other needs in later rounds and via free agency.

4. Quarterback: Don't believe the hype. While Terrelle Pryor and Matt McGloin are not the answer at quarterback, their struggles last year were much more indicative of the lack of talent around them than any legitimate suckitude on their parts. Finding a project in the later rounds and/or utilizing free agency (and the bushels of money now available) will pay dividends if the Raiders can find marquee talent elsewhere early in the draft.

5. Safety: As a Brandian Ross fan, I'm in the minority, but the Raiders are still old and injury-riddled at perhaps the most-underrated position in the modern NFL. The aging Charles Woodson should be back for a final year, and if Tyvon Branch is healthy and Usama Young is re-signed, things will be better in 2014...but finding a student in the draft who Woodson can mentor would be a very smart play.

a-video-game-player frame you want for a franchise offensive tackle. He has great hands, and makes run-blocking look easy with his instinctual body placement and often-unmatched power. He's coming along in pass protection, using his natural ability to paper over any perceived weaknesses. There is a slight chance he is gone at #2 to the Rams, but if not, he has the perfect skill set to help anchor the Raiders' O-line for a decade.

If this kid falls to the 2nd round (with projections for him ranging from 22nd overall to the Philadelphia Eagles to the late 2nd round), he's a no-questions-asked pickup. Not the fastest by any stretch, Crichton still has incredible timing, good arm control, and his Energizer-bunny-on-fire playing style should be coveted by the new-era Oakland Raiders.

Round 3 (67) Paul Richardson, WR, Colorado: The only reason Richardson isn't a dark-horse first round steal is the ACL tear which cost him the entire 2012 season in Boulder. He came back with a vengeance, though, showcasing excellent peripheral vision, intelligent route adjustments, and great break-line speed. Plus, his father, Paul Richardson Sr., is a former Raider. So, win-win.

Round 4 (103) Aaron Murray, QB, Georgia: An excellent game-manager who limits his mistakes in the pocket and can make a wide variety of throws with both touch and great velocity. Undersized, and needs to improve on the run, but his three years working in a pro-style offense in the dog-eat-dog SEC makes him a solid reach in the 4th.

Small, but insanely quick (4.4/40 yard dash). His hip rotation is top-notch, increasing his already solid reaction time two-fold. Quick on the ball, and can be a nightmare for receivers who don't adjust their routes well.

Round 7 (196) Walt Aikens, CB, Liberty: Lacks showcase speed and had some off-the-field issues at Illinois, where coach Ron Zook kicked him off the team after being arrested for theft. However, he is an FBS talent whose imposing frame aids in both initial press coverage and in run support. Has an innate sense of confidence which will translate at the next level.

Round 7 (212) Kerry Hyder, DT, Texas Tech: Hyder always seems to find the quarterback - with both regularity and vicious intent. The 2013 2nd-team All Big-12 DE/DT posted 60 tackles (11.5 for a loss) along with three forced fumbles and two blocked kicks. Lacks elite measurables, but has shown to be a proven commodity against top competition.

Which quarterback makes sense for the Raiders at #5?