New York Leads Oakland 10-7 After A Scrappy First Half 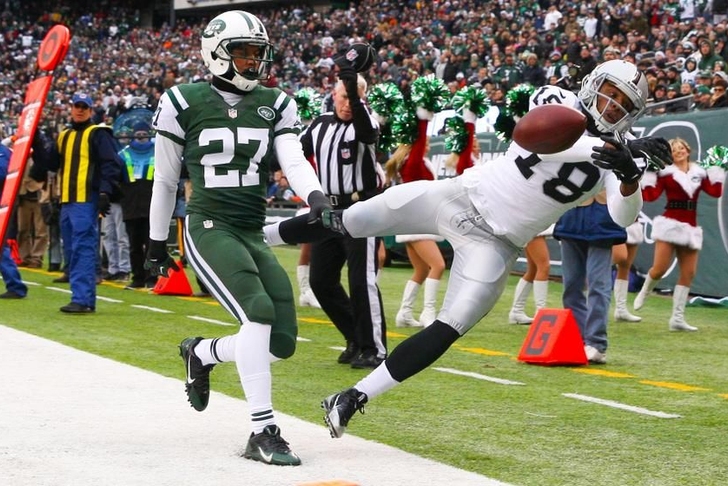 The Oakland Raiders and the New York Jets got off to a fast start on Sunday, and it was clear that both squads wanted to come out and set the tone.

The Jets struck first, capitalizing on a 44-yard return on the opening kickoff. While they weren't able to break off any big plays, they chipped away at the Raiders defense en route to a 45-yard Nick Folk field goal.

Rookie QB Derek Carr couldn't move the chains on his first NFL drive, but it didn't take long for him to get another chance. Jets QB Geno Smith was intercepted by Charles Woodson on the next series, and Carr took over at the Jets 28-yard-line.

The rookie looked poised and collected in the pocket, and it wasn't long before he connected with WR Rod Streater for his first NFL touchdown pass. The Raiders went up 7-3 with a little under three minutes left in the first quarter on their first opening week touchdown since 2009(!).

The Jets looked to have settled down, with Geno Smith engineering another extended drive on the next possession. Smith had taken the Jets all the way down into the red zone, but another turnover kept New York from retaking the lead. Raiders rookie T.J. Carrie forced and recovered a fumble when Smith tried to scramble into the end zone, and Oakland took over at their own three.

Both teams traded possession until late in the second quarter, when Geno Smith finally made the most of an extended drive.  With 31 seconds remaining in the first half, Smith found RB Chris Johnson for a five-yard touchdown.

After the extra point, the Jets went up 10-7 in what would prove to be the last meaningful play of the half.