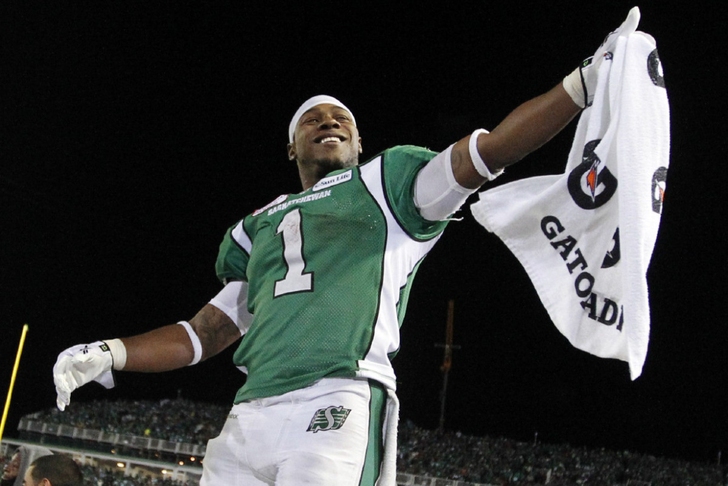 Kory Sheets was the MVP of the CFL's Grey Cup (Canada's Super Bowl), and his success with the Saskatchewan Roughriders earned him a look from the Oakland Raiders this offseason.

Despite his NFL callup, Sheets is still working in Saskatchewan for a trucking company that replaces parts on oil rigs. Offseason jobs in the CFL are fairly common thanks to the league's lower salaries, and Sheets has a perfectly good explanation for second job (via CMJE 980's Green Zone Football):

“I need to pay bills,” he said with a laugh. “I didn’t get a signing bonus so I had to come up here and work.”

Sheets has spent his off-season working with a trucking company out of Carnduff—in the south east corner of the province near the US border—that provides rig-moving services in the oilfield.

“I’m a swamper. What that basically means is I ride with a guy that drives a truck, and whenever he needs help loading and unloading pieces of the oil rigs I get out and help him,” he said. “It’s great. I’m actually having a good time doing it. I get to see things I’ve never seen before and do things I’ve never done.”

Sheets said he had looked for an interim job in the US, but found it hard to find a decent-paying job. Meanwhile, he’s trying to stay in shape for his tryout in Oakland.

“I’ve got to squeeze in training, no matter if I do it late at night or early in the morning. That’s one thing I can’t skip,” he said. “So even though I’m working almost all of the day and most of the morning, if I come home late I hit the gym or hit the treadmill. I’ve got to do something to make sure I stay in shape and am keeping my body right.”

For a look at what Sheets can do on the field, check out his 2013 highlight reel:

After Seeing This Video of a Young Panthers Fan Devastated About Him Getting Cut, Steve Smith Did Something Awesome