Leonard Williams To The Raiders? Weighing The Pros & Cons 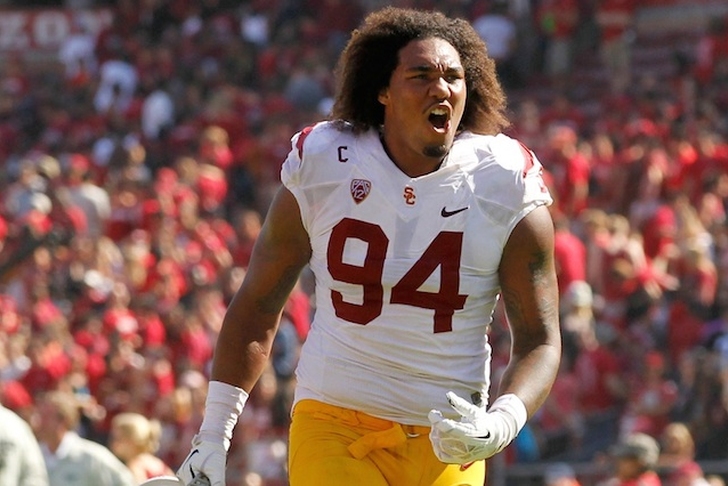 The Raiders aren’t a lock for the #1 draft pick anymore, but GM Reggie McKenzie will still be in a position to get his guy when the draft rolls around (assuming Mark Davis doesn’t fire him first). Which of the top players is the best fit, though? We’ll be looking at the top prospects to examine the pros and cons, with USC DE Leonard Williams our next man up.

Until the Raiders took down Colin Kaepernick five times, Oakland ranked dead last in sacks...and they're still pretty close to the bottom (Oakland now has 18 sacks on the year, with Atlanta and Cincinnati tied for last at 15). Bringing in Williams will guarantee that number goes up in 2015.

Williams can contribute off the edge, but he's also played as a defensive tackle at USC. The Trojans ran a 4-3 when Williams came in, but transitioned to a 52 after Monte Kiffin left and started running a 3-4 in Williams' senior season...and he's been a consistent, impressive performer throughout. Having a guy who can slot in anywhere across the line and wreak havoc will be a massive boost for the Raiders' front seven.

- He Has Room To Improve

As well as Williams has played for USC, scouts agree he can still improve. His huge frame (he's 6'5 and right around 300 pounds) belies his agility, and adding a few moves to his game will make him even more unstoppable. Of the DEs sitting at the top of the draft board, scouts agree Williams has the highest ceiling.

Williams' coaches have raved about his coachability and desire to learn, and he has an excellent attitude and perspective on football. There have never been any questions about his drive, motor, or effort level.

- The Defensive Line Might Not Be The Most Pressing Need

Oakland needs help in a lot of different areas, and you could make a persuasive argument that the Raiders need a skill player more than they need another player on the defensive line. Alabama's Amari Cooper would ignite the offense and give Derek Carr a true elite receiver, and that could improve the Raiders more than Williams would.

Williams has few weaknesses, but his reaction time off the snap could be better. In situations where he can get the jump on his man, Williams is excellent, but when teams use creative snap counts, he's still fairly slow off his mark and can be drawn offsides.

Williams missed some time in 2013 with a torn labrum in his shoulder, and there were some questions about his durability impacting his draft stock before he made it through the 2014 season unscathed.