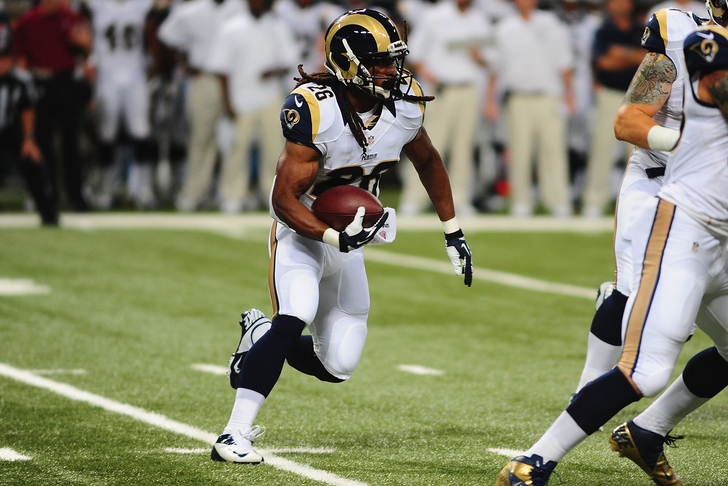 The magic from the Oakland Raiders' (1-11) victory over the Kansas City Chiefs last week was nowhere to be seen on Sunday, as the St. Louis Rams (5-7) jumped out to a 38-0 lead by halftime.

The Rams continued their domination in the second half, running away with a 52-0 shutout in front of their home crowd in St. Louis.

The Oakland Raiders' first three possessions were all three-and-outs, with QB Derek Carr and the Oakland offense gaining just 16 total yards on those drives. St. Louis, on the other hand, would score touchdowns on all three of their opening possessions, gaining 198 yards from scrimmage while placing the Raiders in a 21-0 hole.

Things would only get worse from there for the Silver and Black, but the turning point came early in this blowout.

That's the number of Oakland Raiders drives that produced nine yards or less of total offense. Of those seven drives, two ended in Derek Carr interceptions.

Punter Marquette King got more than his fair share of work, punting eight times for 353 yards of total distance while pinning the Rams inside their own 20 twice.

Other than that? There's not many positives that can be drawn from such a thorough beatdown on enemy turf.

RB Tre Mason gashed the Raiders' defense for an 89-yard TD run in the early second quarter, turning what was looking like a laugher into one at 28-0. He finished with 14 carries for 117 yards and 2 TDs.

A share of the MVP goes to the entire Rams defense as well for helping make a Raiders offense that found some momentum in their first win of the season appear both unprepared and disorganized from the get-go.

The Rams look to move one step closer to the .500 mark as they travel to D.C to face the Washington Redskins next Sunday.

The Raiders will head back home to host the San Francisco 49ers in a regular-season Battle of the Bay.