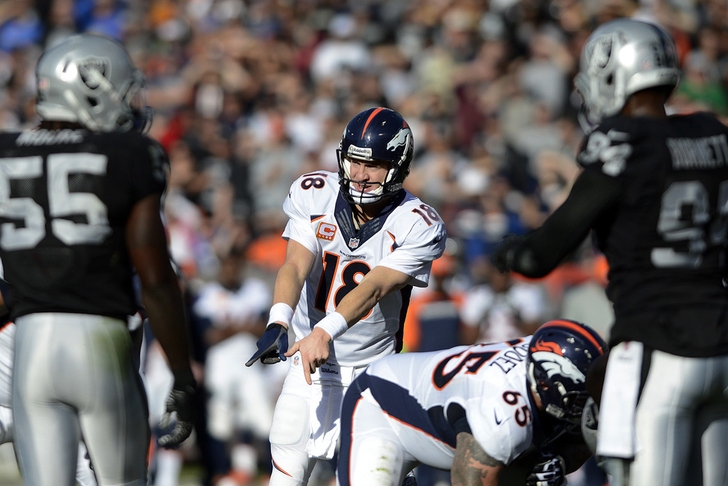 The Raiders came out fighting and looked like they could actually pull off the upset for most of the first half, but a combination of mistakes and poor execution eventually did them in. Peyton Manning and the Broncos took some time to find a groove, but capitalizing on Oakland mistakes helped them find a rhythm and cruise to what was ultimately an easy win.

The Raiders were up 10-6 with three minutes remaining in the half, but then C.J. Wilson danced through the defense on a 51-yard touchdown pass from Peyton Manning and took all the air out the Coliseum. The Raiders' confidence was wrecked, and they never got back in the game. Other than a late consolation TD from Carr to Mychal Rivera, It was one-way traffic from that point on.

Breakout Performer of the Day:

Richmond's own C.J. Anderson, playing in front of family and friends, put on an absolute show...but unfortunately for the Raiders, the home-town kid was playing in orange and blue. The second-year RB out of Cal racked up 163 total yards and a touchdown on 13 carries and four catches.

Oakland's lack of a running game is becoming a more serious problem with each passing week. Today, six players combined to pick up 30 yards on 15 carries. That won't cut it at any level.

Lowlight of the Day:

Khalif Barnes wasn't expecting to have to run with the ball today, but that's where he found himself after Derek Carr hit him with a shovel pass on a broken play early in the second half. Barnes rumbled forward for a few feet, got tackled, and fumbled the ball, giving Peyton Manning possession inside the Raiders' 15-yard-line.

The 7-2 Broncos will finish off their road trip next week in St. Louis, while the Raiders continue to search for their first win on the road against San Diego.