Instant Reaction: Oakland Gets First Victory Of 2014 With 24-20 Win Over Chiefs 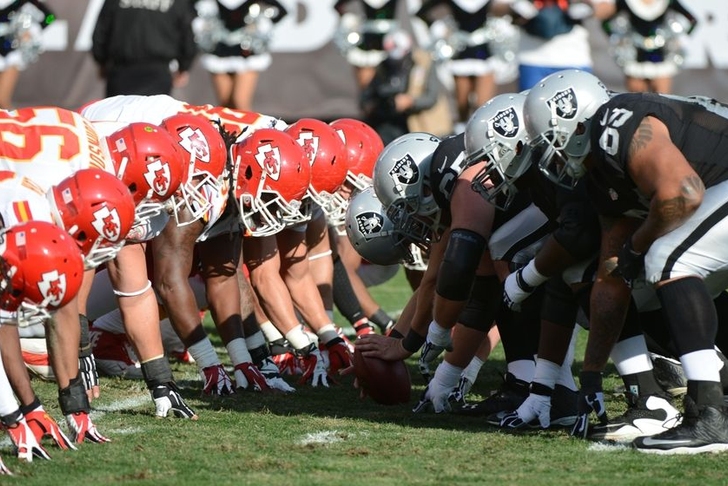 On a rainy night in Oakland, the Raiders outlasted Kansas City to win their first game of the season...368 days after their last victory.

This game came down to a fourth-down attempt with under 30 seconds left in the game, and when Alex Smith couldn't find a receiver, the entire city of Oakland let out a collective sigh of relief.

Unfortunately for the Raiders, their MVP left the game before halftime with a concussion and did not return. In less than one half of action, running back Latavius Murray racked up 112 rushing yards and two touchdowns on four carries - if you're keeping score at home, that's about 1/7 of Oakland's entire rushing offense for the season. The Raiders held on for the win, but it was far from a sure thing when the Chiefs started to rally in the third quarter.

Alex Smith didn't shoot the lights out, but he did exactly what his team wants him to do - play efficient football, work through his progressions, and give his team a chance to win the game. It didn't happen tonight, but this one isn't on Smith.

When Charles Woodson sacked Alex Smith in the third quarter, he became the first player in NFL history to record 50 interceptions and 20 sacks in a career. While this might not be the farewell tour he had in mind, Woodson continues to be an impact player even at age 38.

The invigorated Raiders will head to St. Louis for a matchup with the Rams, while the Chiefs will try to get back on track when hosting Denver on Sunday Night Football.