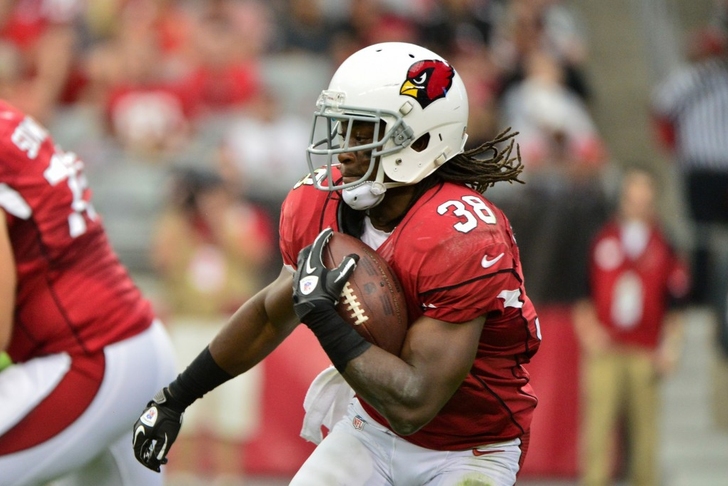 Arizona jumped out to an early 14-0 lead over the Raiders, but rookie quarterback Derek Carr led Oakland to two scores before the break to cut the lead to 14-10 at halftime.

The Raiders added another field goal early in the third quarter to cut the lead to one, but the Cardinals responded with a touchdown to extend the lead. They were then able to control the clock for the rest of the game, holding on for the victory.

After the Raiders cut the lead to one, Arizona responded by marching 80 yards in just eight plays to score another touchdown. That made it 21-13, but it killed all of the momentum Oakland had gained from scoring 13 unanswered points, and the Raiders were never able to recover.

The Raiders offense was no where near productive enough to win this game, particularly in the running game. They only gained 56 yards on the ground and couldn't maintain a lot of drives as a result, which led to a big difference in time of possession (36:57 for Arizona).

Oakland played a decent game all the way around, but they didn't do anything spectacular. However, kicker Sebastian Janikowski drilled an impressive 53-yard field goal, and scored more points (seven) than the rest of the team (six).

Running back Andre Ellington has the skills to be one of the best all-around backs in the league, and the Cardinals utilized those skills against the Raiders. He carried the ball 24 times for 88 yards, and also caught six passes for 72 yards as he carved up Oakland's defense.

The Cardinals will face off against the Eagles next weekend in a battle of one-loss teams, while the Raiders will continue to look for their first win of the year against a Browns team that gave Jacksonville their first win this week.