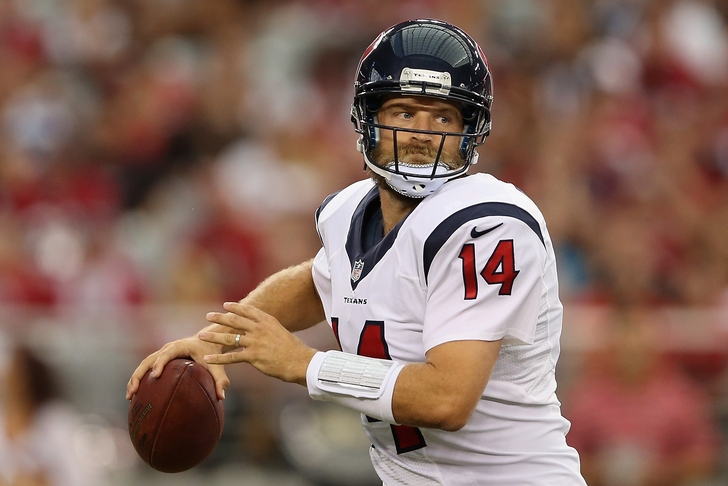 After a sloppy effort in a 19-14 road loss to the New York Jets, the Oakland Raiders (0-1) looked to get their 2014 NFL season rolling against a visiting Houston Texans team (1-0) riding a wave of confidence into the Bay.

Texans Start Strong: Houston opened the proceedings with a definite game plan in mind - mixing up a heavy dose of runs by RB Arian Foster (including a 41-yard burst that was ruled a TD at first, before an Oakland challenge showed him coming just short of the paint) and short passes by QB Ryan Fitzpatrick to keep the Raiders off balance.

Fitzpatrick would hit (check your fantasy lineups) JJ Watt for a one-yard TD score and the first quarter was off and running for the Texans.

When In Doubt, Repeat: One Raiders' three-and-out later and the Texans were right back it - riding Arian Foster all the way into the end zone (he'd score on a 5-yard rush straight at the Raiders' defensive gut) on a 13-play, 70-yard drive that would extend the Houston lead to 14-0.

The Raiders defense would start to tighten up on later drives, but Oakland was left behind the eight ball to begin with.

Costly Mistakes: Oakland's offense put together a promising start to their next drive, keyed by a 41-yard scramble by a surprisingly-mobile Derek Carr. That would all come for naught, however, as a pass intended for TE Mychal Rivera would be expertly read and picked off by the Texans' Kareem Jackson.

That turnover proved costly, as Jackson would return the errant pass 56 yards to the Oakland 24, setting up a 33-yard Randy Bullock field goal just a few plays later. The Texans were up 17-0 relatively early, and the Raiders were left scrambling for answers.

Those answers would not come late, as WR James Jones would fumble twice on what looked to be a huge gain into the Houston red zone - an absolutely bizarre gaffe that finished with the Texans falling on the ball at the one and a Raiders' scoring chance going by the wayside.

Houston: RB Arian Foster - Houston head coach Bill O'Brien's thought process coming into the game was laid bare right of the bat. The Texans handed it to Arian Foster early and often, and the fantasy football darling did right by both his real team and thousands of fantasy teams around the nation. Rushing for over six yards per carry and a touchdown under a pretty hefty workload, Foster looks ready to dominate once again in 2014.

Oakland:  QB Derek Carr - Despite the pick, Carr did complete 2/3 of his passes and even showed off his wheels with the Raiders' biggest positive play of the game. Oakland has something in Carr, if they can fully develop the weaponry around him.