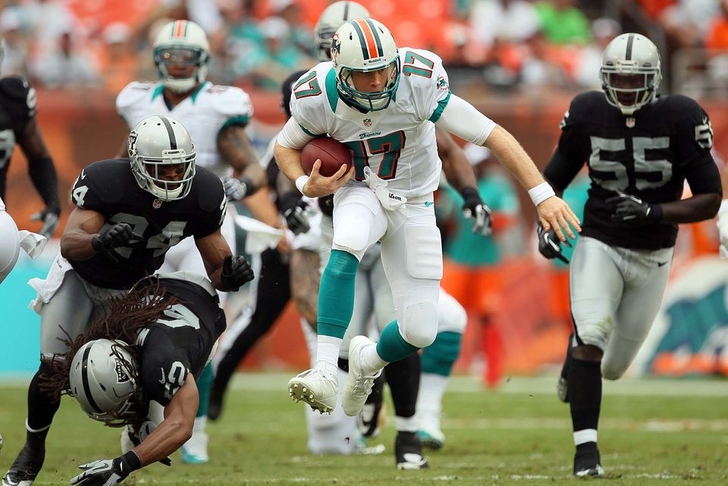 For five minutes, everything went according to plan for the Oakland Raiders. With their first opening-drive touchdown since Thanksgiving 2013, the Raiders looked like they were ready to set a different tone...but then everything that could have gone wrong did.

The Dolphins were impressive, with Ryan Tannehill carving up Oakland's secondary, but the attention this week will go to everything wrong with the Raiders. Here are five things we learned from this beatdown in London:

5. Matt McGloin Is Not The Answer

Matt McGloin has built a well-deserved reputation in Oakland for his grit, determination and unwillingness to settle for a backup job. When Derek Carr left the game with a knee injury, McGloin had a chance to impress, but was unable to make an impact on the game. While no one should blame McGloin for any part of today's result - the game was already well out of reach - he didn't show anything that suggests he should be starting over Carr.

4. Miami Has Options In The Backfield

Knowshon Moreno could be back by Week 6, but the Dolphins have a number of players who got it done on the ground today. Lamar Miller, Daniel Thomas and Damien Williams all looked solid in limited minutes today, and while Oakland might not be the best litmus test, Miami will be encouraged by what they saw from their backs today.

Let's be honest: even with a healthy Carr, Oakland wasn't going to the playoffs this year. If Carr doesn't play, though, that's valuable game time he could be using to develop getting wasted. There's still no word on the severity of Carr's injury, but the Raiders would like to have him back as soon as possible.

Tannehill came into this week facing major questions about his job security, but responded with one of the best performances of his career. Tannehill carved up Oakland's secondary, finishing 23/31 for 278 passing yards, two touchdowns and an interception with a 109.3 passer rating. Tannehill also rushed five times for 35 yards, and while Oakland's defense wasn't exactly dominant, this performance should give the Dolphins QB some breathing room.

1. Dennis Allen Needs To Polish Up His Resume

If the Raiders had won, or kept this close, Allen could have kept his job deep into the season. Unfortunately for Allen, firings are always easier for teams right before a bye week, and Oakland's abysmal performance in front of an international audience will likely end up forcing management's hand. With the Raiders looking even worse than they did when he took over, Allen won't be missed by the Oakland faithful.