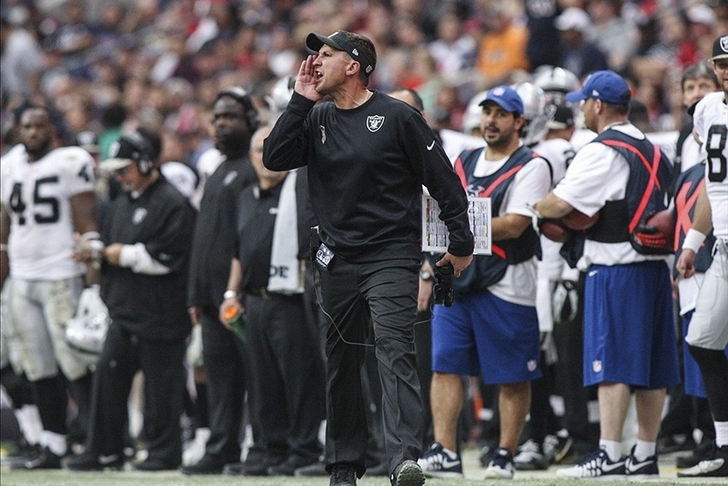 I started this article thinking about all of the awesome pee metaphors that I could come up with after Charles Woodson's brilliant self-reflective blast of the Oakland Raiders' (piss poor?) defensive showing yesterday in a 37-27 depression-fest of a loss to the suddenly offensive New York Jets.

Paul Gutierrez of ESPN reports that after being asked about the Raiders' performance on Sunday, Woodson replied that "We were like the Bad News Bears out there today. Defensively, we went out there and basically peed down our legs."

Somehow, having one of the most respected defensive backs in the league call out the entire defense for wetting themselves in a comical and disorganized way doesn't reflect well on the current regime, notably head coach Dennis Allen.

Now, perhaps the criticism being levied at Dennis Allen is unfair by design. The Raiders, especially on offense, have been a revolving door medical center, and it would be wise to give a bit a bit of kudos to the coaching staff for piecing together a pickup team some weeks in order to handle each week's game assignment with at least a solid dose of pride.

However, the defense which had done so well being pieced together with bubble gum, baling wire, and a bunch of one year contracts, has been slipping quite noticeably. The secondary, and even linebackers dropping back to cover the middle of the field, have been getting burned on simple routes and head fakes. Watching the Raiders on defense at times is like watching your nine-year-old brother figure out what all those x's, o's, and colorful balloons are when picking a defense in Madden. It's amusing, but you just want to yank the controller away after awhile and do it yourself.

Add in the McGloin/Pryor/McGloin stutter step, which with a less confident rookie quarterback core, could have spelled absolute disaster, Multiply it by a rightly impatient fan base wanting to finally see Silver and Black Christmases full of meaningful games and talented players coached up and above their potential levels.

We can levy a fair amount of criticism on Jason Tarver for what happened Sunday, but it seems very very likely Charles Woodson's urine-soaked words will be funneled and channeled into the growing unrest and lack of confidence with the Allen regime. It may be fair and it may not be, but that is life as an NFL head coach...especially as one without a proven track record to fall back upon.

It also doesn't help that Geno Smith hadn't thrown a touchdown pass since week 7, and then decided to both throw and run for one, looking like a legitimate NFL threat for the first time in almost two months...at the expense of the Raiders. At the expense of a very wet, seemingly very disorganized defense.

Check the stars on your pull-ups, Mr. Allen. From the anger building in Oakland, it seems they are disappearing rapidly.