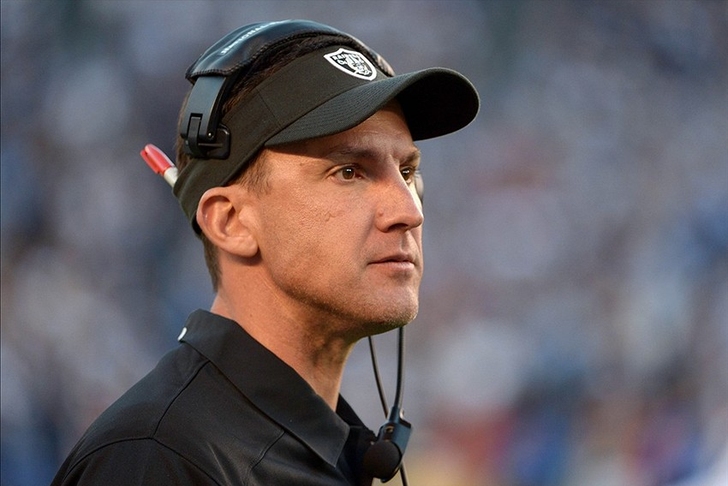 Offensive line coach/assistant Tony Sparano is expected to take over the team in the interim. No word has been given as to whether or not the Raiders have other candidates currently in mind.

Please disregard my recent tweet about the Raiders. These rumors haven't been confirmed by the AP. I'm sorry. — Terry Collins (@APtcollins) September 29, 2014

We should note that this update doesn't guarantee Allen is keeping his job - just that Collins' employers at the AP haven't been able to independently verify what he was told. The AP runs a tight ship when it comes to reporting rumors and speculation, and they don't want their reporters out there passing along information they can't back up with 100% confidence. The short version: Dennis Allen could very well still be fired, but Raiders fans should wait on popping the champagne until this is confirmed elsewhere.

Updated 9/29/14, 7:24 PM PT: The AP's Terry Collins, who originally reported Allen's firing, has deleted the tweet in which he announced the move. While this doesn't necessarily indicate the situation has changed, it is worth keeping an eye on. Stay tuned to our Oakland Raiders page for more information as it becomes available.

Original article: If you've been paying attention, this won't come as much of a surprise. According to the AP's Terry Collins, the Oakland Raiders have decided to part ways with head coach Dennis Allen.

There it is. RT @APtcollins: My sources tell me that @RAIDERS HC Dennis Allen is fired and an announcement could come as soon as Tuesday. — Adam Schefter (@AdamSchefter) September 29, 2014

While the official announcement apparently won't happen for another few days, this move was all but inevitable after Oakland's blowout loss to Miami in London's Wembley Stadium. While a close game might have earned Allen some breathing room, the Raiders were comprehensively outplayed in every phase, handing Miami an easy win in front of an international audience.

Allen ends his tenure with Oakland 8-28 (.222). Assistant HC Tony Sparano is expected to take over in the short-term, but here's our breakdown of Allen's potential replacements. There have been rumors over the last few days that offensive coordinator Greg Olson will take over instead of Sparano, but we haven't been able to independently confirm those reports at this time.