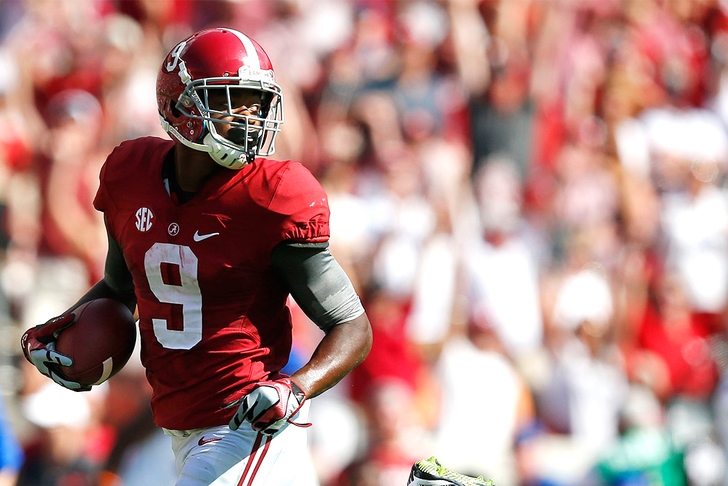 The Raiders aren't a lock for the #1 draft pick anymore, but GM Reggie McKenzie will still be in a position to get his guy when the draft rolls around (assuming Mark Davis doesn't fire him first). Which of the top players is the best fit, though? We'll be looking at the top prospects to examine the pros and cons...starting with Alabama WR Amari Cooper.

The Raiders offense has been crippled this year by their lack of production on offense. Derek Carr's arm, mechanics, and decision-making have all been excellent for a rookie, but there's only so much he can do without targets in the receiving game and a running game that opens up the field. Cooper is the best skill player available in this draft, and it isn't really close.

- Cooper Can Help Right Away

Alabama's offense is about as close to an NFL operation as you'll see at the college level. Raiders fans might not be fond of his offensive coordinator, but the way Cooper contributes at Alabama will translate directly to the NFL without an extensive adjustment period.

We've seen a number of NFL quarterbacks fail to reach their potential, and it often comes back to the situation they land in as rookies. Carr's work ethic will help him avoid some pitfalls, but he needs players who can bring the best out of him if he's really going to become an elite NFL QB. Cooper is already better than any WR in Oakland, and he could push his quarterback to be even better.

- Oakland Has Other Pressing Needs

While the Raiders don't have a very strong group of receivers, there are other areas that badly need to be improved. Oakland's defensive line is in dire need of reinforcements, and this draft class is loaded with excellent DEs. The offensive line and linebackers also need help, but there are fewer prospects at those positions who could go in the top 3.

- Size Is A Growing Concern

This might not end up being much of a concern at all (which goes to show little downside there would be to drafting Cooper), but at 6'1, Cooper is shorter than many up-and-coming receivers in the league. The NFL seems to be moving toward larger receivers, with stars like Calvin Johnson (6'5) and rookie standout Kelvin Benjamin (6'5) exemplifying this trend. Cooper's speed, technique, and route-running skills have kept this from being an issue in college, but the NFL will be another step up.