5 Notable Players The Raiders Could Cut Before The Season 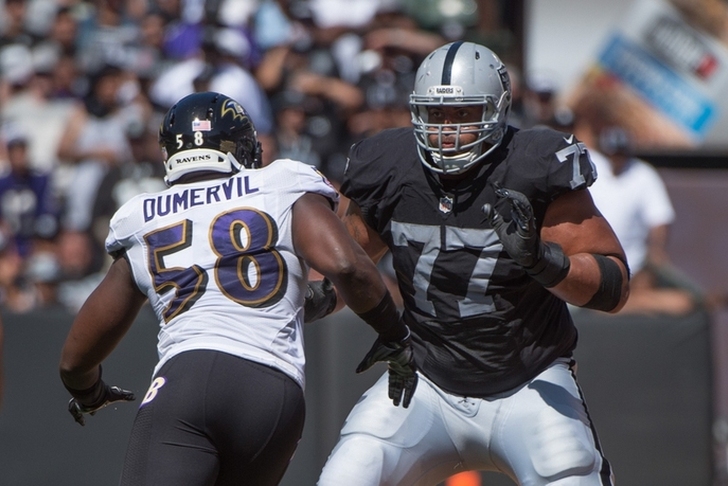 Each year, several veterans end up cut by their teams before the start of the regular season. That will likely be the case this year for the Oakland Raiders. The Raiders are in the midst of a Super Bowl window, but they'll cut veterans if it's in the best interest of the team.

The Raiders would likely try to trade most of these players before cutting them, but more often than not, the players are simply cut. That was the case with players like DT Dan Williams, whom Oakland already released This list only focuses on some of the more notable players, which means we're ignoring the undrafted free agents or other players who don't quite move the needle enough. With that in mind, here are three players the Raiders could cut before the season.

The Raiders are in an enviable place: they have too many offensive linemen. There's Austin Howard, Marshall Newhouse, Vadal Alexander, rookie David Sharpe and Denver Kirkland. Assuming the Raiders take at most nine offensive linemen, that means one of that group is getting cut. Given that Newhouse and Sharpe were added this offseason, they seem safe. While Howard played the most of the three last year, he might need to win the starting right tackle job to keep his spot. Unlike Kirkland and Alexander, who are cheap, Howard carries a $6.4 million cap hit. The Raiders can clear a cool $5 million by cutting him and every dollar counts with the big contracts coming up for Derek Carr and Co. It's more likely than not that Howard stays on the roster and even starts, but there's a chance he's cut. Jones was nearly cut and his time might be up this year. He adds special teams value, but the Raiders might not be in position to carry him as an extra running back. Cordarrelle Patterson will take his return role and the Raiders added both Marshawn Lynch and Elijah Hood. So if Hood makes the roster as the No. 4 roster, there's simply not room for Jones. The Raiders brought in Manuel to compete for the backup QB job, but there's no guarantee he makes the roster. And I mean that quite literally: his $775K salary has no guaranteed money. So if Manuel can't beat out Connor Cook, the Raiders might just elect to roll with two QBs this year.

The idea of cutting Janikowksi has already been rumored. This mostly comes down to the cap hit for the 39-year-old kicker, as he's set to count $4.41 million against the cap. That's near the top of the NFL for kickers and about $4 million of can be saved. However, it's unclear if the other kicker on the roster, Giorgio Tavecchio, is ready to take over. Janikowski is still nailing kicks at a higher rate than his career average, although he wasn't as good as he was from beyond 50-yards last year. The guess is he makes the roster, but there's a chance he doesn't.

Raiders fans have patiently waited for Smith to return from suspension, getting blue-balled by Smith's various teases of a return. Yet Smith hasn't been cleared to return and Bleacher Report's Jason Cole reports Smith isn't close to being reinstated because he's not following the program the league laid out. General Manager Reggie McKenzie has already said the Raiders "aren't considering" Smith. While he doesn't count against the cap while he's on the suspension list, the Raiders could eventually decide to totally give up on Smith and just cut him. And, Fadol Brown was wearing Smith's No. 99 during rookie minicamp. The Raiders and their fans would love to get Smith back, but it's not good that there is still no real news of a reinstatement. There's a real chance Smith had played his last down for Oakland and the NFL.