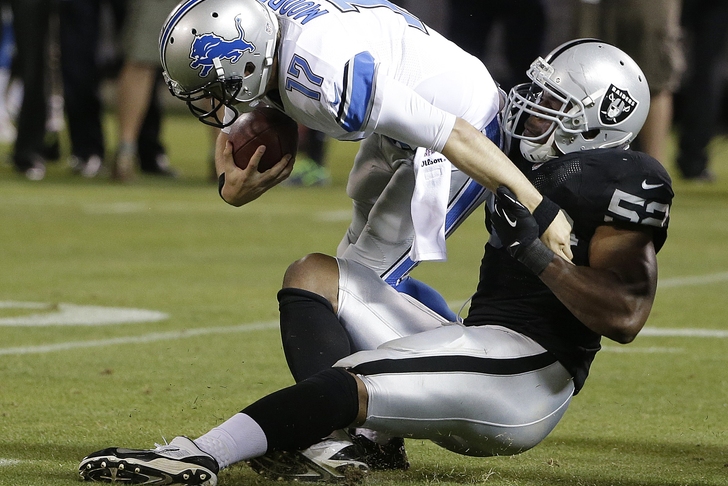 Spring may be the season of the NFL Draft and for NFL players to get to know the changing names and faces moving around the league, but once summer gets here...it's time for smashmouth, break-a-fool training camp awesomeness. While all 32 teams will go to work come this July, only one will turn their experience into reality-show goodness for the 10th season of HBO's documentary series, Hard Knocks.

With that in mind, we thought we'd send a message to the producers of the show -- here's 5 Reasons Why The Oakland Raiders Are The Perfect Team For HBO Hard Knocks. Silver and Black fans are pretty well divided on GM Reggie McKenzie's first three years by the Bay. Some point to the Dennis Allen saga and the team's recent on-field struggles and hang the albatross around his neck. Some see the work he's done in the NFL Draft and remain optimistic about the young talent influx he's brought to the team.

Whatever side of the fence you're on, McKenzie's vision for the Raiders' future has him standing at a major crossroads this season. Sink or swim, here's a real chance to harness that drama for a captive television audience.

4. Derek Carr's One Hell Of A Protagonist

If you don't like Derek Carr and his humble, credit-deflecting ways, you're probably not the nicest human being in the history of the world. Carr's boundless energy and optimism would make him the perfect hero of the Hard Knocks story arc -- a wide-eyed kid just happy to be in the league, but still mature enough as a leader to command respect from viewers and teammates alike.

There are very few NFL coaches who make players tougher just by being in their presence. Jack Del Rio is one of those guys. The Hayward, California native was a hard-nosed mother trucker during his 11 years as an NFL player, and he's carried that reputation/ethic over to his work as a coordinator & head coach. Just watching him break players down to build them back up again would be must-see television.

2. It's The Freakin' Raiders

Maybe this should be #1, but you'll probably forgive us once you scroll down. Haters can throw shade at the Oakland Raiders all they want for the franchise's decade in the wilderness, but the optimism surrounding the team's new era coupled with the true mystique that Raider Nation always provides will keep eyes glued to the set. It's all about the ratings, man. Want the perfect guy for cut scenes of violent one-on-one collisions and bone-crunching tackles? Want to watch the genesis of a true NFL defensive superstar-to-be?

If you answered yes to all those questions, then highlighting Khalil Mack being Khalil Mack during his second NFL training camp is the way to go. The kid's already got mad game, but getting a window into his growth as a NFL linebacker?

MUST WATCH: This 2015 Oakland Raiders Hype Video Will Get You Pumped