5 Reasons For Oakland Raiders Fans To Be Optimistic For 2015 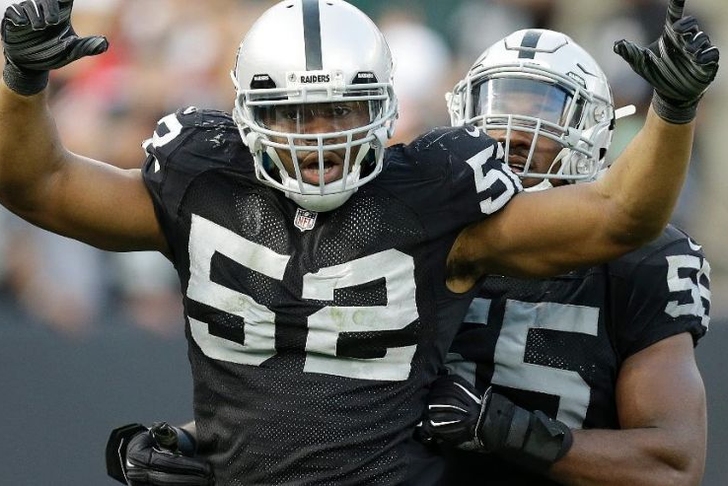 The Oakland Raiders are embarking on an entirely new era under recently-hired head coach Jack Del Rio, and with that era comes a renewed sense of optimism for a franchise that has spun its wheels for the past decade or so. While the haters are gonna talk trash till the day they die, there's plenty of reason to smile heading into next season if you're a member of the Raider Nation.

Here's 5 Reasons For Oakland Raiders Fans To Be Optimistic For 2015.

Carr's rookie season is on the very shortlist for all-time best campaigns for a first-year quarterback, and that was with a extremely inconsistent rushing attack forcing him to chuck it and hope more often than not. With a rebuilt backfield and a revitalized receiving corps that could very well feature Amari Cooper or Kevin White, it's blue skies ahead for the most talented Raiders quarterback since Rich Gannon. People can McKenzie all they want for his unconventional approach to free agency, but there's no doubt in anyone's minds that the embattled Raiders GM knows how to scout and choose talent in the draft. The Raiders' 2014 class, highlighted by Khalil Mack, was arguably the best haul in all of the NFL. There's no reason to expect that trend not to continue in 2015.

The Raiders responded well at times under interim head coach Tony Sparano last year, winning their last three home games against teams that were all on the NFL Playoffs bubble at some point. Del Rio is a natural progression when it comes to backing up Sparano's calls for a tireless work ethic with a coaching philosophy that has bred success whereever he's gone.

The Oakland Raiders were extremely busy this offseason, upgrading their talent base while keeping an eye on the future. Oakland is one amazing 2015 NFL Draft away from turning the whole ship around...especially if a talented project like RB Trent Richardson shakes off his early-career cobwebs. A new year brings new hope, and there's plenty of that to go around with this newest incarnation of Raiders football.