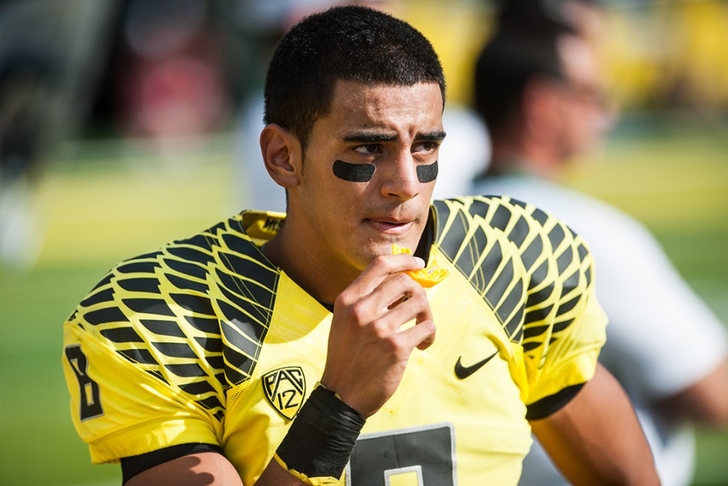 2014 has not been kind to the Oakland Raiders. Sitting on a 1-11 record and smarting from one of the worst losses in franchise history, Raiders fans are getting desperate...but we never expected to see fans turn on rookie QB Derek Carr.

On Twitter after Sunday's massacre, we saw multiple calls for Oakland to draft Oregon QB Marcus Mariota, the current Heisman frontrunner. Several fans asked if the Raiders should draft him, while others were begging Reggie McKenzie to take him with the first pick. Here's why that's a terrible idea:

1. Despite Oakland's record, Derek Carr is having a historically good rookie year. Carr is only the 12th rookie in NFL history to pass for more than 2,000 yards in his first 10 games. His numbers aren't setting the world on fire - he's 20th in passing yards right now with 14 touchdowns and 11 interceptions - but he's in the middle of the pack in most statistical categories and comfortably above the rest of the rookie QB class. Statistically, Carr's 2014 season is right there with Carson Palmer's 2012 and Jason Campbell's 2010...Oakland's only decent QB performances since Rich Gannon's departure. Yes, he's making rookie mistakes...but far fewer than Blake Bortles, Teddy Bridgewater and the other QBs drafted ahead of him.

2. Carr's solid season is happening despite a complete lack of playmakers around him. Oakland has only one wide receiver who would start on most other rosters (James Jones), and even he's having a below-average year (Jones, Oakland's leading WR, ranks 60th in the NFL in yards per game). Jones has lost three fumbles so far, and only one eligible WR or TE has more (NYG's Larry O'Donnell). Unfortunately for Carr, TE Mychal Rivera is tied with Jones with three lost fumbles of his own. It's safe to say Carr doesn't have much to work with here.

3. If a lack of playmakers in the passing game wasn't bad enough, Oakland's ground attack has been beyond abysmal. The Raiders are dead last in the NFL in rushing yards, rushing touchdowns, and total attempts. Maurice Jones-Drew and Darren McFadden were supposed to be lightning and thunder, but instead, the Raiders got a windy day and a light drizzle. The NFL knows Carr is the only way the Raiders can hurt them on offense, and despite teams teeing off on him from the first snap, he's still putting together a solid rookie campaign.

4. There's absolutely no guarantee Mariota will be good as an NFL rookie - let alone better than Derek Carr. Here's the list of Heisman-winning quarterbacks currently in the NFL: Johnny Manziel, Robert Griffin III, Cam Newton, Sam Bradford, and Carson Palmer. Jason White (2003), Matt Leinart (2004) and Tim Tebow (2007) are out of the league entirely. If Mariota wins the Heisman (a virtual lock at this point) and becomes a superstar NFL QB, he'll be breaking a pretty long streak.

Oakland has a laundry list of dire needs to address when the draft rolls around. Quarterback is not one of them. Even if Derek Carr eventually fizzles out and gets replaced (not something we expect to happen), the Raiders are much better off using this year's top pick on a skill player (Alabama WR Amari Cooper comes to mind) or a dominant DE like USC's Leonard Williams or Nebraska's Randy Gregory.

Getting a top-3 pick in the NFL draft presents the rare opportunity to add a player who can contribute right away and immediately improve a weak spot. There is zero evidence that Mariota will be a better player than Carr out of the gate, and quarterback is one of the few areas where the Raiders DON'T need immediate help.

What Position Should The Raiders Address First In The 2015 NFL Draft?